Friedman has been close to Sholom Rubashkin for more than twenty years.

Also there with Friedman was Rabbi Moshe Feller, the head of Chabad-Lubavitch operation in the Upper Midwest.

You can see both in this video, exiting the courtroom behind Rubashkin:

This spring, Friedman and several other rabbis were asked the following question in writing by Moment Magazine: “How Should Jews Treat Their Arab Neighbors?”

The only way to fight a moral war is the Jewish way: Destroy their holy sites. Kill men, women and children (and cattle). [Emphasis mine.]

The first Israeli prime minister who declares that he will follow the Old Testament will finally bring peace to the Middle East. First, the Arabs will stop using children as shields. Second, they will stop taking hostages knowing that we will not be intimidated. Third, with their holy sites destroyed, they will stop believing that G-d is on their side. Result: no civilian casualties, no children in the line of fire, no false sense of righteousness, in fact, no war.

Zero tolerance for stone throwing, for rockets, for kidnapping will mean that the state has achieved sovereignty. Living by Torah values will make us a light unto the nations who suffer defeat because of a disastrous morality of human invention.

As you might imagine, this sparked a scandal that was played out on television news and print media worldwide and Friedman – after seeming to blame Moment for misrepresenting remarks –  Friedman clarified his remarks as referring to a time of war:

“I attempted to briefly address some of the ethical issues related to forcing the military to withhold fire from certain people and places, at the unbearable cost of widespread bloodshed (on both sides!) -- when one’s own family and nation is mercilessly targeted from those very people and places!” Friedman wrote in a clarification issued through a Chabad spokesperson. “I apologize for any misunderstanding the words printed in my name created.”

Moment's editor pointed out the question does not mention war and none of the other rabbis had made Friedman's error.

You can read more about it in the following posts.

Here are frames from the video: 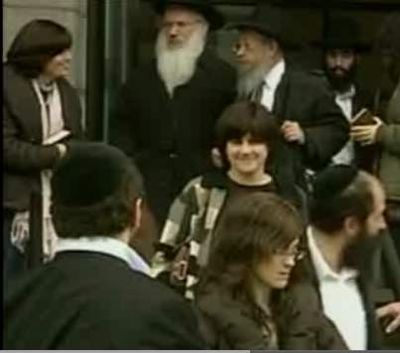