Move seen by some as a response to Artscroll's policy of not citing (or not attributing material to) Modern Orthodox rabbis Like Joseph Soleveitchik.

In April, the JTA reported on the controversy surrounding the debut of the Sacks Siddur, also published jointly by the OU and Koren. The JTA reported that

ArtScroll also has approached the O.U. about publishing a forthcoming siddur based on Soloveitchik's writings, according to O.U. officials.

Artscroll didn't get the gig.
Like the Sacks Siddur that includes the commentary of England's Modern Orthodox Chief Rabbi Sir Jonathan Sachs, the Soleveitchik Siddur is being published by Koren and is due out in Spring 2010, along with a separate volume of Kinnot and commentary for Tisha B'Av. 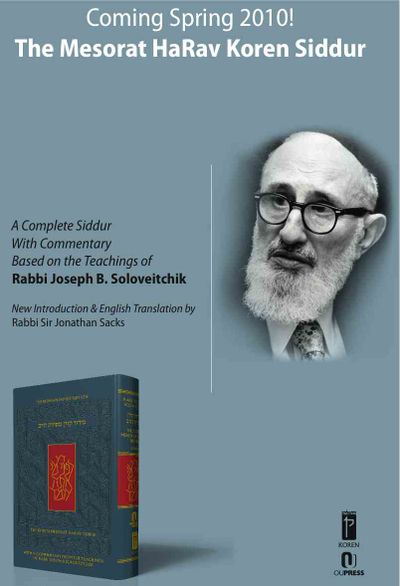 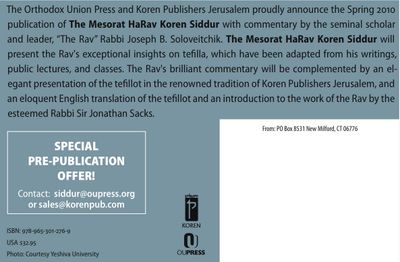 “It's not a question of trying to include as many names as you can for the sake of popularity,” Scherman said. “It's a matter of trying to clarify the material.”

Somehow those "clarifications" are 99.9% haredi. Koren has changed that.
Previous Post.

Move seen by some as a response to Artscroll's policy of not citing (or not attributing material to) Modern Orthodox rabbis Like Joseph Soleveitchik.