"It's a game for friendship, you forgive," the rabbi said to NBA officials. 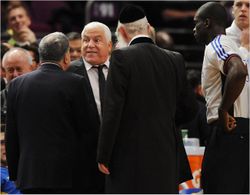 So a basketball coach, an N.B.A. referee and a rabbi walk onto the court at Madison Square Garden locked in an argument.

The coach has just been ejected from the game after being called for his second technical foul but refuses to leave the floor. And while the referee, the rabbi and a group of officials in dark suits try to persuade the coach to go to the locker room, the players start an impromptu half-court shooting contest.

The punch line is that this actually happened — during the third quarter of the Knicks’ preseason game against Maccabi Electra Tel Aviv on Sunday.

With the Knicks well on their way to a 106-91 blowout, Al Harrington was whistled for a charge and began complaining to the referee. Maccabi Coach Pini Gershon took issue with Harrington’s behavior, then proceeded to do the same thing. The referee did not care for Gershon’s comments and gave him the technical.

Gershon remained in front of his team’s bench, not far from where the former Israeli prime minister Ehud Olmert was sitting. It was as if Gershon were preparing to call the next play and put in a couple of substitutes. For a few moments, it seemed as if no one knew what to do with him, until a clutch of league representatives scurried over.

“He wouldn’t leave,” said Scott Jaffer, an N.B.A. security official who spoke with Gershon on the court. “I tried to talk him out of it. They wanted to stop the game.”

Sometime during the 10-minute discussion in front of the visitors’ bench, Rabbi Yitzchak Dovid Grossman, with a long white beard, a black hat and a black coat, crossed the court from his seat to intervene.

Grossman is the founder and the president of Migdal Ohr, a center for orphans and abused and underprivileged children in Israel that benefited from the proceeds from Sunday’s game. And he saw it as his duty to moderate.

Not knowing that two technical fouls result in an automatic ejection, he attempted to persuade the referee to change his call and allow Gershon to stay.

“But he says that this is the law, that he must leave,” Grossman said, referring to the referee in broken English.

It was at that point that Gershon tried apologizing for his outburst, with Grossman behind him.

“This is not a regular game,” Grossman said he told the officials. “In a game for friendship, you forgive.”

Gershon declined to comment after the game, even though he could have freely criticized the officials without fear of retribution from the league.

“He’s a big person in European basketball, and he probably felt like he was being disrespected,” said Maccabi center Maciej Lampe, a 2003 Knicks draft pick.

While Gershon argued on one side of the court, the Knicks seemed mostly confused on the other. They stood around their bench waiting. So Nate Robinson decided to find out if basketball was going to resume and worked his way into the argument.

“I was over there just trying to figure out what was up,” said Robinson, who added that the coach and the rabbi “started speaking a different language,” which was Hebrew.

“It threw me off,” Robinson said. “I needed a translator.”

In the stands, a vocal majority of yellow-clad Maccabi fans among the 14,602 inside the Garden began chanting emphatically. All afternoon, they had made it feel like a home game for Maccabi — much the way the fans did when Maccabi last played at the Garden two years ago in front of 18,000 fans. They waved Israeli flags, belted soccer-style songs and even booed Knicks Coach Mike D’Antoni.

When Gershon ultimately left, storming down the tunnel, the fans became even louder. Neither their efforts, nor the rabbi’s, had saved his place on the sideline.

Posted at 02:28 AM in Haredim, Israel, Sports | Permalink

"It's a game for friendship, you forgive," the rabbi said to NBA officials.