IFCJ Head: I'll Out The Haredim Taking Our Money

Rabbi Yechiel Eckstein reacts to haredi leader's ban on taking money from the International Fellowship of Christians and Jews.

Rabbi Yechiel Eckstein, chairman of the International Fellowship of Christians and Jews, said Thursday that his organization was compiling a list for publication of haredi institutions that receive its donations.

The move comes after Rabbi Yosef Shalom Elyashiv, considered the most respected and influential halachic authority among Ashkenazi haredi Jews, signed a declaration saying that receiving money from Eckstein's organization was "close to idolatry."

"We are not trying to push anyone into doing anything against their will," said Eckstein, who spoke with The Jerusalem Post from the US. "If they don't want funds, they don't have to accept them. But we are not going to go along with a situation in which haredi institutions accept them under the table without publicizing where they get their funding. So we are compiling a list to make sure everything is perfectly transparent." 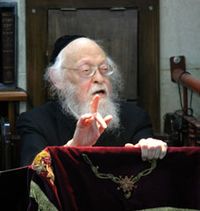 A month ago, Elyashiv signed a document together with Rabbi Tuvia Weiss, head of the Eda Haredit's rabbinical court, that stated it was forbidden to receive donations from organizations like the IFCJ, probably the single largest philanthropist to Israel.

According to Eckstein, the IFCJ raises $70 million a year among Evangelical Christian communities around the world who are interested in supporting Israel.

The importance of Christian charity has grown due to the financial downturn in the US. Many haredi organizations that might prefer not to receive money from Christians have no other choice if they want to stay afloat.

Now, with Elyashiv's ruling, it remains to be seen which will be stronger - haredi organizations' fidelity to their spiritual leader, or their desire to continue to do good deeds.

What complicates matters is speculation that the timing of Elyashiv's decision is no coincidence and that his "handlers" might be using him to advance a political agenda. 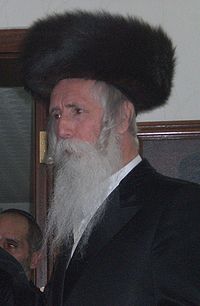 One of the most high-profile haredi recipients of the IFCJ's money is Rabbi Yitzhak David Grossman of Migdal Ha'emek. Grossman, known as the "disco rabbi" for his unique methods of Jewish educational outreach among youth, has been involved with various social activism projects for more than three decades.

Grossman might also be vying for the position of Jerusalem chief rabbi. Those opposed to Grossman might have purposely arranged for Elyashiv's decision to be made and published ahead of the upcoming race to hurt Grossman's chances of winning.

According to Eckstein and IFCJ sources, however, Grossman is not alone. Various haredi organizations in Israel and abroad receive money from the IFCJ or have received support in the past. These haredi bodies include Bnei Brak's largest soup kitchen; a shelter for battered haredi women located in Beit Shemesh; and a soup kitchen for the needy in Haifa run by the city's Chief Rabbi Shear Yeshuv [sic] Hacohen. [Rabbi Shear Yashuv Cohen is not a haredi. He's a famous Religious Zionist follower of Rav Kook.]

Another haredi organization funded by the IFCJ is Tikva, headed by Rabbi Shlomo Baksht, chief rabbi of Odessa, which helps homeless, abandoned or abused Jewish children in Ukraine.

In March of this year, Ukraine's Rabbi Yaakov Bleich lamented that Christians were stepping in to provide funding where Jewish organizations were unable to do so.

Kollel Chabad gave thousands of care packages to needy families in Israel this past Rosh Hashana, funded by the IFCJ.

Rabbi Menachem Brod, spokesman for Chabad in Israel, said that he was not aware that Kollel Chabad received aid from the IFCJ. He said that Chabad's rabbinical court in Israel had issued a halachic decision binding only in Israel recommending to its emissaries not to receive money from Christians.

According to Eckstein, the IFCJ has aided in funding security costs for Chabad Houses in Morocco and India and for the Chief Rabbinate in Turkey.

The document to which Elyashiv added his signature, originally drafted in 2002 by the Eda Haredit, gives three reasons for the prohibition against taking money from Christian organizations. First, publicizing that Christians have given to Jewish charities aggrandizes Christianity, which is a form of idolatry according to many rabbinic opinions. Therefore, it is "close to idolatry." Second, it aids missionary activity by making Jews beholden to Christians. Third, there is a prohibition against receiving charity from a non-Jew when it causes a desecration of God's name.

IFCJ Head: I'll Out The Haredim Taking Our Money

Rabbi Yechiel Eckstein reacts to haredi leader's ban on taking money from the International Fellowship of Christians and Jews.
Failed messiah was established and run in 2004 by Mr. Shmarya (Scott)Rosenberg. The site was acquired by Diversified Holdings, Feb 2016.