"The people who have been complaining about us started doing so even before we actually took over the plant. They seem to be far more driven by their combined agenda than by any genuine desire to restore the plant or to make Postville a better place to live."

In the months since Agriprocessors - formerly America's largest kosher meatpacking plant - declared bankruptcy in the wake of allegations of unethical and illegal business practices, speculation has abounded: Who will fill the gap in the kosher meat market? Will meat prices go up? Will an Orthodox Jew buy the Postville, Iowa plant?

Close to a year later, answers are finally emerging. Montreal-based Hershey Friedman, a well-known businessman and philanthropist - who, among numerous other ventures, sponsored the publication of the popular Oz Vehadar Shas - took over the plant in August, renaming it Agri Star Meat & Poultry.

In a recent interview with The Jewish Press, Friedman discussed his reasons for buying the plant and his plans for its future.

The Jewish Press: What's your background? 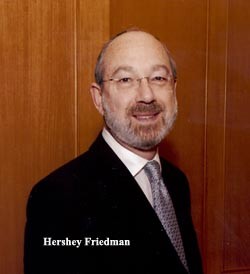 Friedman: I was born and raised in Montreal. My father came from Czechoslovakia and my mother came from Hungary. Both went through the war and in 1949 moved to Montreal where my father established himself as one of the Jewish community's leading businessmen.

When I was only about 10 years old, my father was seriously injured in a car accident. He remained a paraplegic for the remaining 23 years of his life.

As a young boy my elementary school education was in the Satmar cheder in Montreal. After my bar mitzvah, I went to litvishe yeshivas - Ner Yisroel in Baltimore and then Bais Shraga in Monsey.

In 1967 I returned to Montreal, joining our family business in order to help my mother run it and enable my two brothers to continue learning in yeshiva. In 1975 I married Raisy Stuhl in Montreal and today we have six wonderful children, five of whom are married and have their own children. All of my married children are part of my business.

Why did you buy the Postville plant, considering all the controversies surrounding it?

That's a very interesting question. Let me give you a little background. In Canada there is only one kosher milk provider. As a result of this monopoly, the price of milk products is extremely expensive - nearly double the price in the United States. While the difference in price doesn't really affect average and well-to-do people, it makes a real difference to large families that are not well off.

Now, as a Canadian, what have I got to do with it? I'm very involved with klal Yisrael worldwide and it just didn't make sense to sit idly by and watch a monopoly develop. Buying and reinvigorating Agriprocessors's plant was the best opportunity to try maintaining two glatt kosher producers in America.

What's your vision for Agri Star? Will it match Agriprocessors's level of production?

Operations at the plant will hopefully go back to their original size. Right now production is limited to chickens and some deli, but we're aiming to begin returning to beef production sometime within the next few months.

We're currently working on modernizing many areas in the facility and are trying to change or fix a lot of the facility's handicaps in order to make it more efficient.

We also want to add many products that are not produced today. Our deli will be expanded tremendously. Deli doesn't only mean salami, pastrami and turkey. It also means pre-cooked frozen products that you can take home and re-warm.

Many people accused Agriprocessors of mistreating its workers.

I don't want to discuss the past. What happened in the past is not only history, it's irrelevant to Agri Star. We are a completely new company with new management, new ideas and new resources, and we're looking positively toward the future. We want to be good citizens in the state of Iowa and the city of Postville. We will be treating and paying all of our employees properly, fairly, and equally.

Agriprocessors was also accused of hiring illegal immigrants and maintaining unsafe conditions in the plant. How are you dealing with those issues?

Again, I don't want to discuss the past. We have put in a very strong human resources department, which uses "e-verify" to make sure that we do not hire illegal workers. That's part of our business plan.

We have also been investing millions of dollars into the plant, upgrading health and safety to improve the facility and make it a safe environment.

Some people have criticized Agri Star for its employment of three members of the Rubashkin family, considering that the Rubashkins founded and ran the controversial Agriprocessors company.

There is no basis for that criticism. We bought the company's assets out of bankruptcy at a court-approved auction. At the time that Agri Star took over the plant, hundreds of employees who had previously worked for Agriprocessors's bankruptcy trustee had the opportunity to apply for employment by Agri Star. Most, if not all, of these employees were hired by us when Agri Star commenced operations.

According to a recent news report, some Postville locals are complaining - like they complained about the Rubashkins - that you are not sufficiently involved in the larger Postville community.

We have priorities. The first priority is putting the business back in order, which will take time. We will be part of the community - whether it be the Jewish community or the non-Jewish community. But priority number one is to put the plant back on its feet. The people who have been complaining about us started doing so even before we actually took over the plant. They seem to be far more driven by their combined agenda than by any genuine desire to restore the plant or to make Postville a better place to live.

In the meantime, we have met with Postville's mayor and city council several times already and spoken to them about any concerns they have. They have been supportive and we appreciate that. We're on top of it. We will be community oriented.

Is there any message you'd like to convey to kosher consumers?

People need to know that we are here to stay. Our goal is to provide the highest quality products to the Jewish community. We will succeed and when we do, everyone will be better off.

Also, people should know that our plant is the only plant in the world, outside of Israel, that is specifically designed to slaughter and process kosher meat. (Other kosher meat companies use existing non-kosher facilities.) That's why the world is focused on it.

Finally, our plant is ideally located in Iowa where there's a large concentration of the highest quality cattle called Black Angus. In the non-Jewish world, they advertise Black Angus steaks very heavily. It's considered the best beef. This past year, the kosher consumer has not been getting that premium product. We're going to bring it back very shortly.

There are so many inaccuracies in Friedman's remarks, it's difficult to know where to start:

1. Agriprocessors did not sell exclusively or primarily Black Angus beef.
2. There are at least five glatt kosher meat producers in the US – not two.
3. Rubashkin family members hold management positions in the plant.
4. Most of Agriprocessors pre-bankruptcy employees were not rehired by Agri Star, and many of Agriprocessors post-bankruptcy employees were not rehired. Employment at the plant is less than 1/3 of what it was pre-raid.
5. Local Postville critics wanted to meet with Friedman to get a Community Benefits Agreement. Friedman refused.
I don't think Friedman's remarks bode well for Agri Star's future.

Posted at 11:59 AM in Agri-Star, Kosher Business?, Kosher Scandal | Permalink

"The people who have been complaining about us started doing so even before we actually took over the plant. They seem to be far more driven by their combined agenda than by any genuine desire to restore the plant or to make Postville a better place to live."
Failed messiah was established and run in 2004 by Mr. Shmarya (Scott)Rosenberg. The site was acquired by Diversified Holdings, Feb 2016.