Jerusalem's "chastity squad" is branching out and has recently begun operating in the capital's Beit Israel neighborhood. According to local residents, several of the neighborhood's inhabitants have been violently attacked by members of the "modesty guard".


One of the residents told Ynet that a divorcee living in the neighborhood had been assaulted by squad members, who poured hot water on her and beat her at a local playground.


"The 'chastity squad' members snatched her at the playground, poured hot water on her, and when she began shouting they beat her up," said the resident who witnessed the incident.


In a separate incident, squad members allegedly broke into an apartment where several American yeshiva students lived, sprayed them with tear gas and stole a laptop.


A neighbor who arrived to help the students could not identify the assailants, who fled the scene quickly.


Another incident took place in the house of one of the local residents, where his friends used to visit him every evening until the small hours of the night.


About a week ago, unknown people painted the stairs leading to the apartment, and the resident told his friends that he had received several warnings from members of the "chastity squad", accusing his friends of harassing girls passing nearby.


The Beit Israel neighborhood has been changing its nature in recent years, from a traditional Sephardic neighborhood to a neighborhood similar to the haredi Mea Shearim.


According to one of the residents, the "chastity squads" are trying to change the neighborhood's acceptable standards and give the place a more conservative nature.

Here are screenshots from Google Maps that show the geographic relationship between the two neighborhoods. 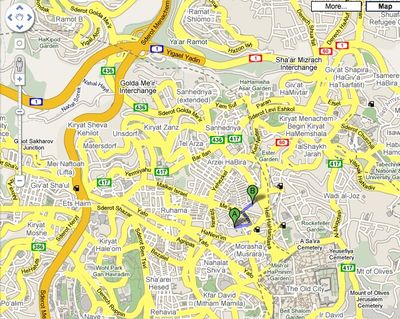 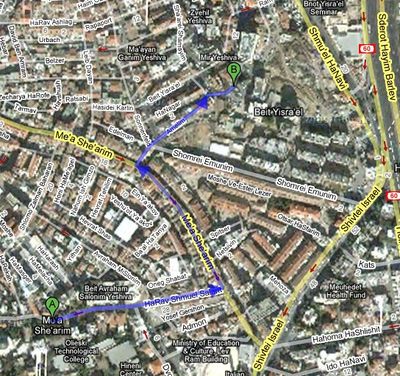 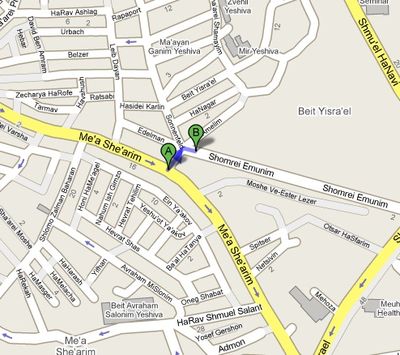