MK Jailed For Corruption Won't Get Leave For Grandson's Bris 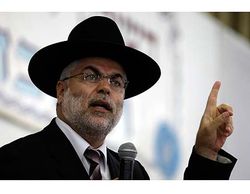 The Tel Aviv District Court on Tuesday denied an appeal by former Minister Shlomo Benizri to leave prison in order to attend his grandson's circumcision ceremony in Jerusalem.

Benizri was represented in the court by Attorney's Avi Himi and Yoram Malka, who claimed that the ruling was discriminatory. According to the lawyers, the court granted a similar request filed by two other prisoners who were not yet entitled to prison leaves.

Judge Zvi Gurfinkel wrote in his ruling, "It's true that other prisoners were granted a special leave. The question is whether this should open a window to granting leaves to all prisoners, despite the fear that allowing the petitioner to leave will constitute a break of the procedures obligating all prisoners. The petitioner is indeed being discriminated against."

The judge addressed the State's claim that the two other prisoners were allowed to leave the prison by mistake. "I am not getting into that claim, as the Israel Prison Service has its own reasoning. Accepting the petitioner's request this time will lead to a situation in which the IPS order on allowing prisoners to take a special leave will be meaningless."

'Unequal treatment'
Benizri's son, Netanel, told Ynet that this was the continuation of unequal treatment of his father. "It's very painful and regretful for the entire family. There have been precedents in the past, but when it comes to Benizri there are no precedents, not benefits and no considerations. He entered prison quietly and is doing everything quietly. He is lecturing and doing all he can."

Attorney Himi said in response to the ruling, "The State Prosecutor's Office is abusing former public figures, and if their name is Benizri, they abuse them sevenfold."

Attorney Malka added, "Benizri is in a very bad mood. He accepts the sentence, but wants to see some sensitivity and equality between him and other prisoners, who were allowed to leave for such events. It's important to note that Benizri is not allowed to meet with his old and sick parents or with his brother, due to the IPS's visits quota."

Benizri began serving his four-year sentence on September 1, after being convicted of taking a bribe. Several days later, he was visited by Rabbi Yosef, Shas Chairman Eli Yishai and members of the Shas Council of Torah Sages.

MK Jailed For Corruption Won't Get Leave For Grandson's Bris

Shlomo Benizri's attorneys say the ruling is "discriminatory."
Failed messiah was established and run in 2004 by Mr. Shmarya (Scott)Rosenberg. The site was acquired by Diversified Holdings, Feb 2016.