Elior Chen: Extradition Illegal, Brazilian Police "Kidnapped" Me And Sent Me To Israel

Chen allegedly used knives, hammers and other instruments to abuse children as young as 3 and 4 years old. 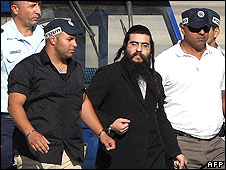 Elior Chen, the spiritual leader of an ultra-Orthodox sect in Jerusalem suspected of severe child abuse, arrived in Israel yesterday after being extradited from Brazil.

Chen and several of his followers allegedly used knives, hammers and other instruments to abuse children as young as 3 and 4 years old in the West Bank settlement of Beitar Illit in February and March 2008.

Haaretz has learned that Chen, who fled the country a year and a half ago, intends to remain silent during his interrogation, claiming police determined his guilt even before he was extradited.

Jerusalem police said they would interrogate Chen shortly after his arrival and request that his remand be extended during a court hearing today.

Chen, who is suspected of being the key figure behind one of the worst child-abuse cases to ever occur in Israel, was arrested by Brazilian police in Sao Paulo in June 2008 after a 45-day manhunt.

He fought extradition and his case was heard last May by Brazil's Supreme Court, which found there was cause to put Chen on trial for allegedly subjecting eight children to intense physical and mental abuse. He is said to have done so after asserting that the children were possesed by the devil.

Chen's appeal against the extradition was rejected by the court last month.

He was accompanied on the flight from Sao Paulo to Israel by Chief Superintendent Motti Edri, head of the investigation team in charge of the case.

Police said that during the course of Chen's interrogation, which will continue over the next few days, he will be confronted among other things with the statement given by the abused children's mother, who has turned state's evidence and is slated to testify against him in court.

Police sources said Chen would probably be indicted on several charges of abuse in less than two weeks.

Chen is suspected of persuading a group of followers to abuse two children from one family, aged 3 and 5, in order "to repair their soul."

Chen allegedly hit the children in the head and face and burned their hands as part of a purification ritual. One child sustained permanent brain damage and is in a vegetative state, according to Israeli officials. Police sources said Chen not only coaxed his followers to abuse the children but was allegedly involved in abusing them himself.

Chen's attorney Ariel Atari said his client will reserve the right to remain silent during police interviews. "The police have said that no matter what he says there will be an indictment, so there's no point in his saying anything," Atari said. "[Chen] will cooperate fully with the justice system and give a full statement, concealing nothing. But he has no faith in the police."

He added that the mother's testimony would be unreliable. "The mother cleared Chen of blame in a series of statements made to the police, but after promising they'd let her off the hook if she incriminated him, she recanted. Even the court has determined that she is a manipulative woman," Atari said.

During the 14-hour flight Chen was mostly silent, even when some passengers told him what they thought of him.

A number of Chen's followers have also been indicted for child abuse, while others have abandoned him. One group member told Haaretz, "I have no interest in this story. I was ready to testify against Chen but nobody asked me."

Posted at 01:02 AM in Crime, Litigation, etc., Haredim, Israel | Permalink

Elior Chen: Extradition Illegal, Brazilian Police "Kidnapped" Me And Sent Me To Israel

Chen allegedly used knives, hammers and other instruments to abuse children as young as 3 and 4 years old.
Failed messiah was established and run in 2004 by Mr. Shmarya (Scott)Rosenberg. The site was acquired by Diversified Holdings, Feb 2016.