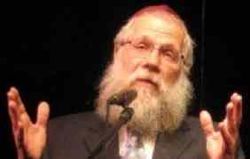 As proof of that Hecht noted:

[T]he recent New Jersey arrests in which every defendant with a Jewish last name had bail raised to double or triple that of their non-Jewish counterparts.

What Hecht failed to mention is that those Jewish defendants all had strong ties to Israel, where they had been allegedly laundering money.

In other words, part of the conspiracy in which these defendants allegedly participated was based in Israel.

This makes these defendants serious flight risks – and that drives up the amount of bail.

In contrast, the other defendants have no overseas ties linked to their alleged crime. For the most part, they are local officials who took bribes.

This makes their flight risk lower, which is why their bail is lower.

Past all that, Hecht – himself never a paradigm of ethics – seems to believe bank fraud and its related crimes and the immigration charges are things everyone does, and only the "Jew" Rubashkin is being singled out.

This is false, of course, which is why that argument won't be made (one would hope) in court.

Hecht isn't saying it simply to whip up support on the Haredi street for Rubashkin. Hecht repeats this lie because it throws into motion a halakhic scenario.

According to most understandings of halakha, when a government suspects an unspecified  member of the Jewish community committed a crime, the leaders of the community go to the government and give it a list of Jews they believe could have committed it.

Why? Doesn't this violate mesira law, the Jewish law that forbids informing?

Mesira law is pushed off when informing: 1) stops a chillul hashem (a desecration of God's name, and embarrassment), or, 2) when it makes a kiddush hashem (the opposite of a chillul hashem).

I believe the Baal HaTanya, the first Chabad rebbe, cites this as the halakha, Jewish law, in his Code of Jewish Law, as well.

But there is one time when this would not be true: if the charges against the Jew are antisemitic in nature.

If Rubashkin, et al, are victims of antisemitism (never mind most of those charged in both the Rubashkin and New Jersey corruption cases are non-Jews), helping the government would be mesira.

And that opens up anyone who does cooperate with the government to all the penalties a moser, informer, can be subject to, from murder to shunning. (Think the Mafia's Omerta.)

Hecht infamously told the NY Daily News that no Jew could moser on the Chabad hasidim who beat a black youth in Crown Heights last year, because any mesira is illegal under Jewish law:

"The Hebrew word is mesira, which means basically you are not allowed to be an informant," said Rabbi Shea Hecht, a well-known figure in Crown Heights.

"In essence, I am not allowed to snitch, period."

But, in fact, there are times when one is obligated to inform. One of those times would have been that Crown Heights case. Another would be Rubashkin.

Chabad and its haredi supporters seem to want Orthodox Jews to have all the benefits of US citizenship but few, if any, of the responsibilities.

Crying antisemitism where there is none is simply another way of attempting to achieve that goal.

UPDATE 8:30 am – As I noted above, Chabad.info stole their entire post from VIN. VIN has the entire audio as released by Dov Hikind's staff.

Hikind did not host this show. Jo Lazar – billed as a community activist – guest hosted.

Much of what Hecht says is astonishingly inaccurate, worthy of the darkest days of the old Soviet Union's Pravda.

One of Hecht's gems is that Rubashkin, "didn't even graduate from the 8th grade" Here's the entire audio.