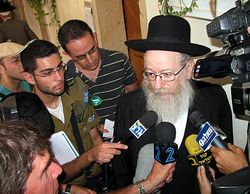 Litzman is technically Deputy Defense Minister. This is a legal fiction that allows Litzman to avoid voting on certain cabinet level votes mandatory for all cabinet ministers. There is no Health Minister other than Litzman, who is a Gerrer hasid.

Litzman also intervened in the "starving mother" case that sparked haredi riots throughout the summer in Jerusalem and Bet Shemesh. Litzman got the mother released from jail, and helped keep her free – even though she failed to comply with the conditions of her release.

Litzman is thought by some to be one of the men who protected accused pedophile Avrohom Mondrowitz, who fled indictment in Brooklyn more than 20 years ago and lived safely in Jerusalem for most of that time, until extradition proceedings were finally begun in 2007.

Channel 2 is now reporting Litzman applied heavy pressure on psychiatrists to "soften" their expert opinions and evaluations of the level of risk presented by the release of Haredi sex offenders in order that the court-ordered supervision on them will be eased after their release. Several psychiatrists threatened to resign.