A Child Of Moses

Since she had no previous education, she had to start in first grade, even though she was almost 14. “What, you just came down from the trees?” a teacher said to her, in a mocking tone. 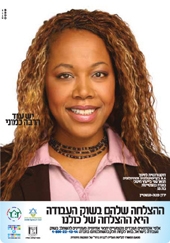 A thousand Jews were gathered for the Passover seder. There were no tables or chairs or haggadot. The matzot were handmade. No one had gone shopping at the local markets, since they had grown all the food themselves. The plates were brand new; each family had broken their old ones in a wild ceremony and made new ones by hand, as they did every year.

The village had one rabbi, whose name was Kess Edene. Before the seder, he led all the Jews of the village, who were dressed in white for the occasion, up a small hill to make special prayers in their language of Amharic.

When everyone sat down for their seder meal, the rabbi got up and told the people the same story he told them every year, based on this idea: Our father Moses didn’t make it all the way to Jerusalem, but one day, we will.

In fact, for 20 centuries, the ancestors of these Ethiopian Jews heard the same message: Moses didn’t make it, but we will.

In the early 1980s, thousands of these Ethiopian Jews finally made their way to Jerusalem as part of Operation Moses. A girl from that village, Yarden Fanta, who was 11 at the time, remembers having to carry her 2-year-old sister on her back for a month as her extended family trekked toward the refugee camps of Sudan.

Late one night, Israeli Mossad agents, armed with a list of names of Jewish refugees, plucked Fanta and the other Jews out of their camp and led them by bus to a waiting airplane.

They were now huddled together on their very first flight, hundreds of them, on the way to the place they and their ancestors had been promised for 2,000 years.

Twenty-four years later, Fanta, who was introduced to me by Gil Artzyeli of the Israeli Consulate, is sitting at the Coffee Bean on Pico Boulevard telling me her story. I can’t help noticing that she rarely stops smiling.

“It’s like now you have a dream to touch the sky and you reach it,” she tells me, trying to explain in her broken English the feeling of journeying to Israel. “One day you think you gonna die, one day you think God will help you.

“When something happen that you never believe will happen, you become like freeze, like shock.”
Once she settled in Israel, though, it didn’t take long for Fanta to feel other shocks. After getting bounced around several absorption centers during her first year and a half, she finally landed in a boarding school. But since she had no previous education, she had to start in first grade, even though she was almost 14.

“What, you just came down from the trees?” a teacher said to her, in a mocking tone.
But what shocked her even more was that the teacher wanted her to take only home economics classes, like sewing.

“Not this,” Fanta would tell her in the little bit of Hebrew she had picked up. “I want something else.”

Luckily, there was another teacher, a woman named Aliza Soen, who responded to Fanta and was able to give her that “something else”: reading and writing classes and the beginning of a real education.

Fifteen years later, Fanta became the first Ethiopian woman in Israel to earn a doctorate, completing her Ph.D. at Tel Aviv University in, what else, education.

Today, she’s married with children (her married name is Fanta-Vagenshtein), and she is a post-doctoral fellow at Harvard University’s Graduate School of Education. Her field of research is on how illiterate immigrants adapt to modern societies.

She’s also writing a book on her story. The book will cover, no doubt, what she says are “the three times she was born” — the first being when she was actually born, the second when she landed in the Holy Land, and the third when she visited, during a school field trip, a piece of the Holy Land she says changed her life: the Weizmann Institute.

She calls it her “wow moment.” She recalls walking around the campus, visiting laboratories and conference halls and student lounges and thinking, “Wow, I can have the same air.”

She eventually did have the “same air,” but not before she struggled to climb, in her words, “the highest possible mountain.”

She’d love to see more Ethiopian Jews in Israel climb that mountain. Although she says things have improved somewhat, it’s been a rough ride for many of them, not least because the chief rabbinate often makes them go through impossible hoops just to prove they’re Jewish.

But nothing seems to faze Fanta. She still has her smile on. She’s learned that the promised land Rabbi Edene talked about at their seders in the village — the land Moses never entered and her ancestors dreamed of entering — well, that magical place was not the end of her yearnings, but the beginning of new ones.

She’s learned, in other words, that to be Jewish means to always have something to yearn for.
Maybe that’s why they call it the Promised Land — it’s a land full of hardships, yes, but also full of promises.

David Suissa is the founder of OLAM magazine. You can read his daily blog at suissablog.com and e-mail him at dsuissa@olam.org.

A Child Of Moses

Since she had no previous education, she had to start in first grade, even though she was almost 14. “What, you just came down from the trees?” a teacher said to her, in a mocking tone.
Failed messiah was established and run in 2004 by Mr. Shmarya (Scott)Rosenberg. The site was acquired by Diversified Holdings, Feb 2016.