Teacher, a native of Israel who is also a cantor, was arrested after four families went to Israeli police complaining of sexual abuse.

REHOVOT-TORONTO – A former high school teacher and cantor in Toronto is under house arrest in Israel, where he now lives, following allegations of sexual abuse.

An Israeli, the charismatic educator was a shaliach (emissary) at the Richmond Hill campus of the Community Hebrew Academy of Toronto (CHAT) in 2000-2005. The following year he served as cantor of Shaarei Shomayim congregation for 10 months before returning to Israel. 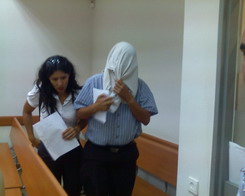 One of the most highly respected and popular teachers in this community and a winner of CHAT’s Toronto Teacher of Excellence Award in 2002, he was known to inspire youth religiously and had volunteered at several NCSY (Jewish outreach organization) youth programs. A gifted musician with a golden voice, he performed at community events and private celebrations.

In a communication sent last Friday to all families with students at the Richmond Hill campus during 2000-2005, Paul Shaviv, CHAT director of education, stated:
“The school takes any such allegation very seriously. The safety and security of our students is our first priority. Until the very recent notification of these allegations, we had no cause to doubt the integrity of this individual. With expert guidance, we are undertaking a thorough investigation within the parameters of information we currently have. I am asking any former student, or parent, with information or concerns about any relevant incidents that may have taken place at our school to contact me directly….

“The school continues to expect the highest possible professional and personal standards of all associated with our institution. Where there are matters needing attention, you have our assurance that they will be dealt with responsibly, speedily and expeditiously.”

“As a community, we are deeply saddened by this news and our thoughts and prayers go out to those who may have been affected.”

At this writing, reports on the arrest have appeared in the Hebrew press only. A story in Ha’aretz claimed that two students had come forth with allegations, and YNET reported there were three complainants. Most of the readers’ comments following the stories were made by students that defended the accused passionately, calling him a tzaddik (righteous person) and accusing those who made the allegations of jealousy and malice.

However, according to another source that wished to remain anonymous, the allegations of sexual impropriety had begun to surface as far back as June, but were kept secret.

Rabbi Glenn Black, CEO of NCSY Canada, spoke to the Jewish Tribune on Monday and expressed his dismay.

“As the largest Jewish youth organization in North America, NCSY has a built-in structure to deal with any type of situation that affects our young people. This includes an office of an ombudsman to whom all cases are referred.

“Personally, I am shocked and saddened by this report and I am in close contact with our international NCSY leadership to send out a full and coordinated response. In light of this new information, we are sending a letter to our membership, inviting them to share their concerns and to assure them that NCSY will do whatever is necessary to protect our youth.

“I hope that during these days of reflection between Rosh Hashanah and Yom Kippur, we will all pause and consider what more we, as a community, can do to protect our children.”

A spokesperson for the police in Rehovot, Israel, told the Jewish Tribune that Rabbi Avichai Zehavi has been officially charged with sexual abuse and that four families have come forth separately with allegations to date.

Teacher, a native of Israel who is also a cantor, was arrested after four families went to Israeli police complaining of sexual abuse.
Failed messiah was established and run in 2004 by Mr. Shmarya (Scott)Rosenberg. The site was acquired by Diversified Holdings, Feb 2016.