Satmar Protest At Hadassah In NYC


You would think Hadassah would tire of this abuse, of the threats these thugs have made against Hadassah doctors and staff, and of the seemingly endless stream of lies manufactured by haredim against it.

You would also think Jewish media – the Forward, say, or the Jewish Week or Jewish Press – would strongly editorialize against these thugs and in support of Hadassah.

But weeks of riots, attacks and comparing Hadassah to Auschwitz and its medical staff to Dr. Mengele haven't provoked much outrage outside of Israel.

While I realize this is probably impossible to do under Israeli law, I also think it's time for Hadassah to decide whether it wants its tax deductible donations to be used to treat people who abuse its members and staff. Hadassah – a Zionist organization – is saving the lives of anti-Zionist thugs who repay that kindness with evil.

Let the haredim be encouraged build their own hospital and let Hadassah use its resources for people who do not wish for its destruction.

Meanwhile, the trial of the haredi mother mentioned in the video, who is accused of starving her toddler son, and whose arrest sparked weeks of rioting in Jerusalem and Beit Shemesh, has been postponed because, at last minute, she fired her attorneys – apparently in a bid orchestrated by haredi leaders to delay the trial: 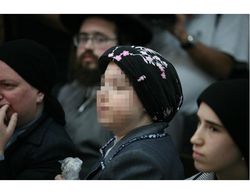 The haredi woman accused of starving her three-year-old son surprised the Jerusalem District Court Wednesday by replacing her attorney.

Attorney Deborah Atia, replacing attorneys David Halevy and Reuven Bar-Haim, asked the court for a continuance, saying the question of the woman's legal representation has yet to be resolved in full.

Justice Joseph Shapira, presiding, agreed to postpone the trial, set be begin next week, to October 18.

Notwithstanding, the court will resume hearing the aspects of the case pertaining to the women's visitation with her other children on Thursday.

Once the court was advised of change of counsel, Atia filed a motion for a 30-day continuance, to which the State objected.

The sides eventually compromised on a two-week deferral in the trail. "This trial will begin and end within an appropriate time period," said Shapira. "(Change of counsel) motions must be kept to a minimum. If this (continuance) will not suffice I'll have no choice but to appoint a public defender."

At that point in the hearing, Rabbi Avraham Froelich, who has been counseling the family from the case's beginning, asked the court for 45 additional days in order to finalize the question of legal counsel.

Justice Shapira adamantly refused, saying his court "will not allow such deferrals," and warning the woman that if she failed to appear before the court on October 18, a bench warrant for her arrest will be issued.

Following the hearing, Rabbi Froelich told the media that "attorneys David Halevy and Reuven Bar-Haim are excellent lawyers who have concluded their part in the case."

Halevy and Bar-Haim, however, told Ynet that as far as they knew, no final decision regarding legal counsel has been made, but if their client "wishes to seek different counsel, we wish her luck in future proceedings."

Satmar Protest At Hadassah In NYC

Massive anti-Hadassah and anti-Israel demo caught on video.
Failed messiah was established and run in 2004 by Mr. Shmarya (Scott)Rosenberg. The site was acquired by Diversified Holdings, Feb 2016.