This is the third consecutive week these demonstrations have been staged. 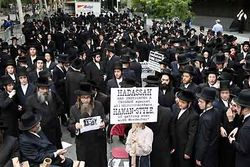 The mother, a member of the extreme Neturei Karta sect, was accused, among other things, of disconnecting her son's feeding tube while he was hospitalized at Hadassah Ein Kerem Hospital.

The woman's arrest sparked a series of violent haredi riots in Jerusalem.

Demonstrators waved signs reading, "Hadassah has instigated a crusade against all Jewish mothers Haman-style of getting even with Mordechai."

Rabbi Nahum Samson Meyer, head of the "True Torah Jews against Zionism" said prior to the rally, "Our hearts are pained over the Israeli government's campaign to throw an innocent Jewish mother into prison in order to cover up for their hospital's mistreatment of her son."

The rabbi spoke as Prime Minister Benjamin Netanyahu arrived in New York for the UN General Assembly session and a meeting with US President Barack Obama and Palestinian President Mahmoud Abbas.

"The United Nations has always taken up the cause of oppressed peoples around the world. We have come here to publicize the cry of our religious brethren who live under Zionist state oppression," he said, referring to haredi claims of police violence during protests in Jerusalem against the mother's arrest and the opening of the Karta parking lot on Shabbat.

"As Netanyahu tells the world his views on the Middle East crisis, we wish to make clear that his state, which presumptuously calls itself Israel, has no connection with the Torah or with Judaism," Rabbi Meyer added.

"He and his fellow Israeli leaders have no right to speak in name of Jewry. Their long record of oppression and abuse of our community prove it. We call upon President Obama and all the esteemed leaders of the world not to recognize the Zionists as leaders of the Jewish people."

This is the third consecutive week these demonstrations have been staged.
Failed messiah was established and run in 2004 by Mr. Shmarya (Scott)Rosenberg. The site was acquired by Diversified Holdings, Feb 2016.