Resist The Urge To Kiss Your Rabbi

A special health alert for Sefardim, manusphiles and the fervently chivalrous.

Observant Jews who kiss the hands of esteemed rabbis, their own hands after shaking somebody else's or publicly owned Torah scrolls or holy books out of respect or devotion should tame their 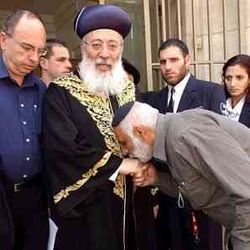 urge and avoid this practice for their own and others' health.

Saliva with the swine flu virus or ordinary seasonal flu strains could easily spread the diseases, according to the Health Ministry's new director-general, Dr. Eitan Hai-Am, who on Thursday issued an advisory to those who spend time in synagogues, yeshivot and other religious institutions frequented by large numbers of people.

The advisory strangely did not advise avoiding the much-more-common practice of hand-to-mouth kissing of mezuzot (while hold parchment with sections from the Torah that are affixed to doorposts), even though people can sneeze or cough on their hand, touch the mezuza and kiss their fingers, making the principle of infection the same. Deputy Health Minister (and Gur hassid) Ya'acov Litzman, asked by The Jerusalem Post two weeks ago about whether mezuza kissing would endanger health, said it would surely not, as the presence of the mezuza on the doorpost "protects all homes."

However, the commandment is to have a mezuza on all doorposts; kissing the ritual objects is only a custom.

Although Orthodox women do not kiss the Torah, they commonly kiss mezuzot, as well holy books when they close them. Pregnant women in their second and third trimesters are at high risk for complications of the flu, along with smokers and people suffering from chronic diseases and obesity.

Flu viruses are spread by coughs and sneezes and by hand contact with the pathogens. When the High Holy Days begin in a week, synagogues will be packed. The ministry advised that people with the flu should not go to shul but stay at home so as not to infect large numbers of people in a closed space. Only when they have completely recovered should they return to synagogues and yeshivot.

Hai-Am said that sneezes and coughs should be directed to tissues that are quickly disposed of. If no tissue is available, sneeze or cough into the crook of your elbow, but never into your own hands. Wash your hands frequently with soap and water or sanitize them with alcohol gel, especially after sneezing or coughing. Just rinsing the hands by pouring water over them (as in netilat yadayim) is not effective in eliminating the virus.

One may shake hands, but sanitize your hands soon afterwards. In (usually hassidic) communities in which kissing the hands of other men, especially scholars, and kissing one's own hand after shaking hands, is common, these practices should be avoided. Do not directly kiss ritual objects that are used by others, but one may kiss one's own phylacteries, prayer book or prayer shawl, the ministry said.

If food is served, anyone with flu symptoms should avoid preparing and distributing it. Synagogues and yeshivot should be regularly aired. Dishes and cutlery should be cleaned carefully with soap and warm water. The use of cloth towels by congregants should be avoided; only paper towels or hot-air blowers (except on Shabbat and other holy days) should be used.

Not only the religious are at risk, according to Dr. Alon Eidelstein, a family physician at Maccabi Health Services. He says that holiday gatherings that involve frequent kissing can also spread the flu. During a festive meal, he adds, avoid contact with others' cutlery. In addition, if you usually serve nuts or other snacks from one container, instead prepare individual ones to avoid infection. Just one infected person going in to collect a few munchies could infect the rest, he said, adding tongue-in-cheek that this year, "you have an excuse not to kiss your mother-in-law."

Meanwhile, an H1N1 flu patient who has completely recovered was identified at the ministry's central virus lab as having a strain resistant to treatment by Tamiflu, the antiviral drug that is being prescribed to swine flu patients at high risk for complications. The same has happened in other countries around the world. The ministry said on Thursday that it is continuing to study the resistant strain and its significance but is not changing its policy on dealing with the virus.

Resist The Urge To Kiss Your Rabbi

A special health alert for Sefardim, manusphiles and the fervently chivalrous.
Failed messiah was established and run in 2004 by Mr. Shmarya (Scott)Rosenberg. The site was acquired by Diversified Holdings, Feb 2016.