Shas spiritual leader Ovadia Yosef and Chairman Eli Yishai on Monday visited former Shas Minister Shlomo Benizri, who is serving a four-year sentence at the Maasiyahu Prison after being convicted of bribery charges.

Accompanying Yosef and Yishai in their visit to the Ramla prison were members of the Council of Torah Sages, Rabbi Rafael Pinchasi and Rabbi Shimon Badani.

The entourage entered the prison's walls in their armored vehicle and met with Benizri in one of the prison's administration's offices, where they were served biscuits and soft drinks.

Rabbi Badani said upon his entrance to the prison, "We are here to identify with him, with the great work he has done in Torah studies." 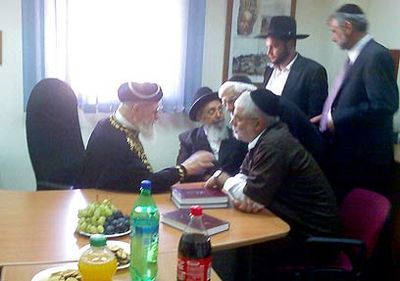 The rabbi criticized the Supreme Court's decision to aggravate Benizri's sentence, saying, "How dare they raise the penalty when they know the ones they are hurting are Torah students."

He said, "Benizri was also hurt a little, but tens of thousand will be losing their Torah lessons. I am certain that without Rabbi Benizri's Torah lessons, part of those students would be murderers or drunkards who drink and then murder – the kind we hear about every day."

Before the rabbis left the prison, Rabbi Yosef gave a sermon and prayed with the rest of the prisoners in the wing.

Yosef also got the chance to talk with Benizri in private before leaving the site.

Benizri was visited by his family recently, with his wife and six of his children meeting him for the first time since he entered prison.

"It breaks my heart to see my father like that. Seeing him like that, a man who always made sure to look dignified, the way he really is, coming out with prison clothes... It was unbearable," his son Netanel said.

Shas honcho convicted of bribery and corruption lauded, loss to Torah study claimed.
Failed messiah was established and run in 2004 by Mr. Shmarya (Scott)Rosenberg. The site was acquired by Diversified Holdings, Feb 2016.