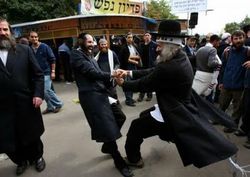 Rabbi Daniel Dayan of the Rabbi Nachman Charitable Foundation told the UNIAN Ukrainian news agency that police should not violate the rights of residents of Uman while guarding Bratslaver Chasidim pilgrims during the Rosh Hashanah celebrations in the city.

Police placed barriers near the grave site of Rabbi Nachman during the Bratslaver's pilgrimage to Uman this year to celebrate of Rosh Hashanah, organizing access control for local residents, which excluded women. This restriction lead to protests by women’s organization.

The Femen Women’s Movement in Ukraine in an open letter last week addressed to the Ukrainian Secret Service, asked the service to allow women free access to the Pushkinsky district of Uman, where the grave site is located, emphasizing that “pilgrims often show their total neglect of local traditions.”

More than 20,000 Chasidic Jews from around the world made the pilgrimage this year to Uman in central Ukraine, the burial place of Rabbi Nachman, founder of the Bratslav Chasidic movement. Some 9,000 to 12,000 Bratslavers have come to Uman each year since the annual pilgrimage to Ukraine was revived in 1988, after the Soviet Union loosened restrictions on religious practice.

Request follows protests from a  women's group.
Failed messiah was established and run in 2004 by Mr. Shmarya (Scott)Rosenberg. The site was acquired by Diversified Holdings, Feb 2016.