Translated, Rahm Emmanuel is a "shit," a "devil," or "disgusting." 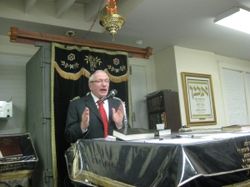 In July, President Barack Obama hosted fifteen Jewish leaders in the Roosevelt room of the White House. A picture of Franklin Delano Roosevelt hung over the mantle, as is traditional during Democratic administrations. It replaced the picture of Theodore Roosevelt who, after eight years above the mantle, now hangs on the southern wall.

In his opening remarks the President stressed that he was a friend to Israel and had always been, but Israel must make concessions in order to be recognized by moderate Arab states. Stephen Savitsky, president of the Orthodox Union, who sat directly across from the President, had the last question.

“I’m trying to understand what moderate means,” Savitsky asked, “Egypt today was caught in the Rafah crossing smuggling thousands of missiles that could hit Sderot—”

“What is an appropriate response?” Savitsky demanded. The President, according to Savitsky, sighed.

On Tuesday, September 9th, three months after the meeting at the White House, President Savitsky visited the Red Shul, Kehillas Bais Yehuda Tzvi of Cedarhurst, to describe his encounter with President Obama. The audience of fifty offered a cold reception to Mr. Obama’s Mideast strategy.

Standing at the bima with a Siddur in his hand, Savitsky began his speech with the story of former Secretary of State Henry Kissinger’s remarks upon his return from a shuttle diplomacy mission to the Middle East. Asked to describe his visit in one word, Kissinger replied, “Good.” Asked to describe it in two words, he said, “Not good.” Savitsky then continued with a quote from the Pesukei D’zimra portion of the morning prayers that summarized his feelings about the president: Have no faith in nobles.

Savitsky described the president in the now-mandatory terms: “gracious,” “charming,” and “confident.” According to Savitsky, President Obama said that America must have a new role as an “honest broker” to get the moderate Arab states “to say publicly what they’re saying privately,” as opposed to the role America had under former President Bush.

“Look, we had eight years where there was no question on whose side we were on, and where did it get us? Are we any closer?” the president said, according to Savitsky.

In response to a nuclear Iran, a notion that sent shudders through the Red Shul, Savitsky explained that the president believed in “economic sanctions,” but not a timetable.

When asked when the president would go to Israel again, President Obama responded that a picture of him with a yarmulke at the Kotel is hanging on a wall at Al Jazeera.

“They think I go there three times a day,” the president said dryly.

Savitsky contrasted the meeting with President Obama with a meeting with former President Bush that took place shortly before he left office. When one of the delegates asked President Bush why he was so relaxed, Mr. Bush joked, “If you want me to lie, it’s yoga. But really, I believe in G-d. I believe I have a mission.”

The current administration believes that if Israel makes concessions it will be recognized.
“I said to [OU Washington Director] Nathan Diament, what’s plan B?” Savitsky said. “They just say no. Plan A will work.” 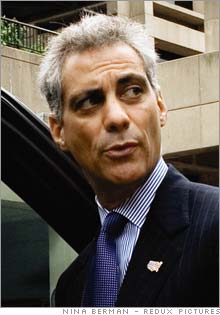 “They all say he’s a foul-mouthed person and as a Jew, a menuval [a disgusting person]. I find it offensive. He’s a mishneh l’melech [advisor to a king], the language he uses… I think it’s very unbecoming as a Jewish person.”

Questions from the audience were all variations on the same theme: “Do you think he’s lying?” “Is Rahm Emanuel a self-hating Jew?” And one man delivered his own mini-lecture, demanding to know, among other things, why Obama attributed a quotation from the Talmud to the Koran.

To a question about Jonathan Pollard, Savitsky said that the best opportunity to win his release had passed with the end of the Bush administration and, “I don’t think it’ll ever happen.”

After the speech some quiet moderates spoke to the Jewish Star.

“I’m a Republican,” said Abe Zelmanovitz, an attorney and the chairman of the Red Shul, wearing a green Hermes tie. “Pragmatically [Obama] is looking for a different approach. The right-wing perspective is he’s out to get us. I don’t think that. He’s looking at this through a different angle.”

“We believe in Obama,” observed Paul Gross, a Holocaust survivor who lives in Cedarhurst. “He means well. He’s sincerely trying for peace. I think it’s a problem with the Orthodox community that they’re anti-Obama. It doesn’t speak well for the Orthodox to be so anti-Obama, because it can backfire. I like Obama and people give me heck.”

But to some in the Red Shul, it seemed, Orthodox fears about the Obama administration have come to pass and crystallized into despair.

“I hope the next four years go by fast,” said Judy Greenberg. “I have no faith. The feeling of gloom and doom is upon us.”

Offering a more tempered approach, Rabbi Yaakov Feitman, the rav of the Red Shul, quoted from Proverbs, that a king’s heart is in Hashem’s hand. President Harry Truman, who recognized Israel immediately after the United Nations partition vote in 1948, Rabbi Feitman observed, was no friend of the Jews either.

Translated, Rahm Emmanuel is a "shit," a "devil," or "disgusting."
Failed messiah was established and run in 2004 by Mr. Shmarya (Scott)Rosenberg. The site was acquired by Diversified Holdings, Feb 2016.