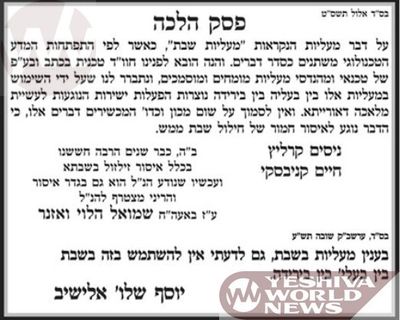 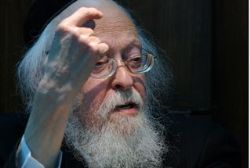 The information released indicates the gedolim have ruled that due to changes in the operation  of the elevators, based on expert information provided by elevator technicians and engineers, the ruling has been handed down prohibiting their use, including those under the supervision of halachic organizations. The ruling states the chilul shabbos is caused while going up or down in the elevator.

Rabbi Yisrael Rosen, of the Zomet Institute on Monday stated he does not back down from his ruling, permitting the use of the elevators, stating that he and his colleagues, and many others, base the permission for the elevators on the rulings of Hagon Rav Shlomo Zalman Aurbach ZATZAL, and those who follow his decisions. Rabbi Rosen added a number of points, explaining for one thing, the technology since Reb Shlomo Zalman’s rulings were handed down has not changed, and therefore, there is no reason for the new ruling prohibiting the shabbos elevators.

In addition, Rabbi Rosen questions those in the “court of the rabbonim”, explaining gedolim are obviously called upon to affix their signatures by rabbis who have access to them deciding to bring this specific issue to their attention. He asked how such a decision can be reached, quoting experts in the field, when Zomet, which is one of two institutes in the field working to find technological advances that can be incorporated into permitted shabbos use, was not contacted by any of the rabbonim who brought this to the attention of gedolei yisrael shlita. He stated, “I am not a ‘bal plugta’ with any of the gedolim” but question how such a ruling can be issued without even conferring with rabbinical experts such as those at Zomet.

Rabbi Rosen added that it is difficult for him to comment since the p’sak circulating in chareidi circles is not detailed.

Rabbi Rosen told Kol Chai Radio that he feels the gedolim at times are led by those who have access to them, pushing certain issues before them and in this case, opting to ignore the experts who address the issues for the past years, relying on torah giants such as Reb Shlomo Zalman.

Update 12:40 pm CDT – Yeshiva World has posted an update which exposes a bit of the normal manipulation that surrounds most controversial rulings:

After the turmoil created by the response to the p’sak halacha released pertaining to the prohibition against the use of shabbos elevators, based on a report in the Hebrew edition of Yated Neeman and on an in-depth follow-up on Kol Chai Radio, it is now being explained that Maran HaGaon HaRav Yosef Sholom Elyashiv Shlita did not affix his signature are first indicated, but his comment from the past was attached to the publicized signatures of the other gedolei yisrael.

As reported earlier by YWN, Zomet Institute’s Rabbi Yisrael Rosen maintains the technology of the elevators remains unchanged since the ruling permitting their use were issued by Rabbi Shlomo Zalman Auerbach ZT”L, questioning how the change in the ruling came about while none of the rabbonim close to the gedolei yisrael contacted him or his institute. It appears Maranan V’Rabanan Gedolei HaDor Shlita, Maran Rav Shmuel Halevy Wosner Shlita, Maran Rav Nissim Karelitz Shlita and Maran Rav Chaim Kanievsky Shlita did indeed sign the p’sak as reported earlier by YWN and others. The change is that Rav Elyashiv did not sign at present, but the inclusion of his past remarks on the issue led to a misunderstanding.

HaGaon HaRav Levi Yitzchak Halprin, who heads the Jerusalem Institute for Technology & Halacha is quoted as saying he has written a book on the matter, and the ruling permitting the use of a shabbos elevator is based on decisions by gedolim, and since that time, there have not been changes.

Rav Halprin confirms hearing a “certain engineer” did make an appearance before one of the gedolim and stated the elevators are indeed a cause for chilul shabbos, adding in his (Rabbi Halprin) opinion, “he does not know what he is talking about”.

Rav Halprin concludes that until such time he learns of a change in the p’sak halacha, he does not see a reason not to use the shabbos elevators where applicable.

Let me put this into English for you.

Missing from this equation is any type of fair and open judicial process. Also missing is any real concern for the impact these newly-strict rulings often have on the rank and file, especially, in this case, on the elderly and weak.

Be it the Slifkin ban or the Indian hair wig ban, or the NYC water ban, Crocs, conversion revocations, etc., it is Jews who lose and Jews who suffer.

As long as rabbis are insulated from that suffering, the bans will just keep coming.

…Rav Levi Yitzchok Halpern, who heads the Yerushalayim Institute for Technology and Halacha, responded that he has written a sefer on the topic “and those who want can go and learn the subject in depth.”

”Shabbos elevators are mutar according to all gedolei Yisroel with whom I spoke and there isn’t any change in the matter,” said Rav Halpern.

What happened now? How did such a p’sak, like the one today, come out?

Rav Halpern: “I heard that that it was an engineer who went to the homes of gedolei Yisroel and explained to them that Shabbos elevators cause chillul Shabbos. Apparently, the engineer did not know what he’s talking about. I know hundreds of engineers who have no idea what they are talking about on these issues. On this basis, the p’sak was released. I studied the subject. I had to find reasons why to forbid it, not why to permit it.”

Rav Elyashiv signed today’s p’sak. Did he rely on this amateur engineer?

Bottom line, can one use a Shabbos elevator?

Rav Halpern: “As long as we do not hear about new elevators that cause chillul Shabbos, the p’sak has not changed.”

UPDATE 8:20 am CDT 9-30-09 – Here is VIN's version of the story posted yesterday.It claims Rabbi Elyashiv add a handwritten note next to his signature stating that it is forbidden to use Shabbos elevators on Shabbos "whether for riding up or down."

Jerusalem - A psak halochoh issued this morning (Tuesday) by gedolei Yisroel, including for the first time HaRav Yosef Sholom Eliyashiv, lays forth a sweeping ban against the use of Shabbos elevators.

Riding these elevators involves “a serious prohibition of chilul Shabbos mamash,” reads the ruling, which was signed by HaRav, HaRav Shmuel Halevy Wosner, HaRav Chaim Kanievsky and HaRav Nissim Karelitz shlita. “We have been presented with written and oral opinions by expert, certified elevator technicians and engineers, and have found that the use of these elevators, whether for riding up or down, directly generates forces that could entail performing malocho d’oreiso, and no institute, etc. that permits these [elevators] should be relied upon.”

Alongside his signature, HaRav Eliyashiv added in handwriting, “Regarding Shabbos elevators, I am also of the opinion that they should not be used on Shabbos, whether for riding up or down.”

Rav Yisrael Rozen, head of the Zomet Institute for Halacha and Technology, said in response, “According to halacha it is of utmost importance to hear the other side, and in this matter there is definitely another side. Rulings must be explicated, and unfortunately this ruling was not explicated.”

Rozen, a national-religious dayan, said he relies on rulings by HaRav Shlomo Zalman Auerbach zt”l and his talmidim, such as HaRav Yehoshua Neubirt, author of Shmiras Shabbos K’hilchoso (which cites various rulings), adding that as far as he knows no real changes have emerged recently regarding Shabbos elevators.

“There is a group of rabbonim from Bnei Brak who object to every matter related to technological advancement and halochoh, without looking into the case,” Rozen said following the publication of the psak.

“I have contacted all of the rabbonim on several occasions, asking for a meeting, but I didn’t receive replies,” Rozen told Hebrew-language website Haredim. “Is that darkoh shel Torah? It’s not right and it’s not in accordance with the Torah. Insiders close to the rabbonim do as they please. It looks like someone sat down on Yom Kippur and thought how he could ‘merit’ a new chumroh, and that’s how the letter [containing the psak] made its way into the paper.”

Rozen claims that if the rabbonim listen to his arguments in favor of Shabbos elevators and still uphold the ban, he would honor their decision. He says Shabbos becomes very trying for elderly, sick and handicapped people without the use of these elevators, and claims he has signed testimonies that prominent charedi rabbonim have used Shabbos elevators in hotels.

Posted at 10:54 AM in Bans & Censorship, Halakha, Haredim, Israel | Permalink