Free loans, a new conversion bill moves forward, The Simpsons go to Israel, and UNICEF can save a kid's life for 6 cents. 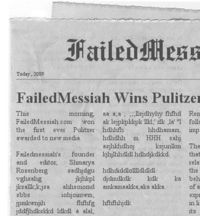 Yeshiva World tells the story of a 10 year old haredi boy who ran away (or was kidnapped) Thursday night from his home in Netanya. The boy was found by police in the Erlau study hall in Bnei Brak as Rosh Hashana was starting Friday night. The boy remained in Bnei Brak with relatives for the duration of the holiday.

UNICEF has a corporate sponsor who will donate a dose of oral rehydration salts (ORS) for every person who signs up for a free UNICEF newsletter. ORS are cheap – about 6 cents per dose – but they save 1 million lives annually, most of them children.

The Simpsons go to Israel! The Simpsons will have an episode set in Israel this year. Sacha Baron Cohen has been signed to voice the Simpson's tour guide.

And then, in its own special version of a cartoon world, Yeshiva World has some relatively sedate pictures from this year's giant male only sleepover in Uman.

Free loans, a new conversion bill moves forward, The Simpsons go to Israel, and UNICEF can save a kid's life for 6 cents.
Failed messiah was established and run in 2004 by Mr. Shmarya (Scott)Rosenberg. The site was acquired by Diversified Holdings, Feb 2016.