« Judge Refuses To Drop Charges Against Rubashkin | Main | After Years Of Abuse, Jerusalem City Government Moves To Clean Up The Kapparot Ritual »

Letter from Jerusalem:
It's Time To Tell The Truth

"I will be direct: We are shouldering the burden of the Haredi public in every area of life."

Time to tell the truth
By Rachel Azaria • Ha'aretz

The time has come for us to look directly into the eyes of the ultra-Orthodox who live in this country and say to them: Dear Brothers and Sisters, it's just not working anymore. Not for us and not for you. 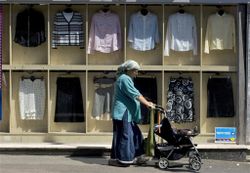 After nearly a year on the Jerusalem City Council, and the more I become involved in the day-to-day running of municipal affairs, I am only more convinced of just how true this is. And the situation is getting harder all the time.

The "system" by which 80 percent of Haredi men in this country don't work, and the average Haredi woman gives birth to eight children, isn't workable. We, the non-Haredi public, are no longer capable of carrying them on our shoulders. And there is no moral reason why we should be required to do so.

I will be direct: We are shouldering the burden of the Haredi public in every area of life. Humans don't live on air alone, after all, so someone has to support those eight children, and pay for the needs of the 600,000 members of the ultra-Orthodox community nationally, whether it be in education, health care, housing, food or extracurricular activities for the children. And although the Haredim do receive some generous assistance from donors abroad, for the most part, it is we who pick up the tab: We, the rest of the population of the State of Israel, who work hard and pay high taxes - we are the ones who support them. 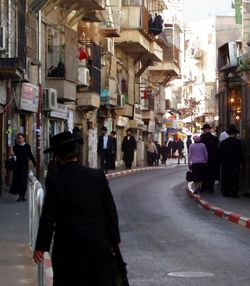 How does the system work? I'll give an example. In non-Haredi municipal preschools in Jerusalem, 70 percent of the fees are covered by the children's parents, with taxpayers paying for the remaining 30 percent. The discounts that make up that difference usually go to impoverished families, new immigrants or those with other difficulties. It's natural in any society for those who are weaker to need assistance. Thirty percent is a high percentage, it's true, but we can still afford to cover the cost. That's what social solidarity is.

Among the Haredi public, however, only 30 percent of tuition is covered by parents, while the lion's share, the remaining 70 percent, is picked up by - that's right, the taxpayers.

Or, take housing, a major portion of any family's budget. Israel is crowded and housing is expensive. Almost no construction is going on these days for young families of limited means. Except for Haredim, that is. Our minister of construction and housing, Ariel Atias, recently announced a new project to build apartments specifically intended (in terms of size and cost) for young couples, but some 90 percent of them are in ultra-Orthodox communities. And who is subsidizing this worthwhile endeavor? Non-Haredi young couples and the rest of the population who pay taxes.

Let's move on to arnona (property tax). The Haredi public is almost completely exempt from paying it, for economic reasons. Therefore, in Jerusalem, where one-third of the Jewish population is Haredi, there is a lot of arnona that isn't being paid. Who then pays for street-cleaning, maintenance of parks and playgrounds, and other aspects of our collective day-to-day life in the capital? We, the non-Haredi public. Little wonder, then, that the city is so dirty. And I haven't even mentioned army service, public funds that are directed to yeshivas, child allowances and many other examples of how the burden is not shared equally. So, the time has really come to tell ourselves, and the Haredim, the truth: It can't go on like this. In Jerusalem the situation is the most palpable, because of the critical mass of 30 percent of the Jewish public that is ultra-Orthodox. But keep in mind that nationally, 25 percent of all the children who entered first grade this month are Haredim. And in time, what has happened in Jerusalem will happen in the rest of the country.

What's amazing is that the system isn't even working for the Haredim themselves. In the first generation of the Haredi "revolution" - revolutionary in the sense that the men studied instead of working - in the state's early decades, they still had parents who could support them, even after they got married and had children. In the next generation, perhaps some money was left from the grandparents. Today, though, no money remains, and raising eight children with no regular full-time income is no easy task, even with all the discounts in the world. Even with the support of the non-Haredi public and foreign donations, these families remain poor, and have no way of escaping the vicious circle of poverty, so long as their rabbis maintain their hard-line policy.

During this period of soul-searching, it would be worthwhile for Haredi leaders to think about the reality they have created, and to acknowledge that something has to change. I respectfully propose that they take the initiative and the historic step of encouraging their public to begin to support its own needs just as the non-Haredi public supports itself. I can see the growing anger and bitterness the non-Haredi public is feeling toward its ultra-Orthodox brethren, because of being forced to shoulder the burden of an entire public that can't cover its own needs. The same will happen nationwide in time. And if the ultra-Orthodox public doesn't take the lead in changing this situation, then the non-Haredi majority will do so. Because we're all very tired. And the system no longer works.

Rachel Azaria is a member of the Jerusalem City Council from Tnua't Yerushalmim (Jerusalemites Movement).

Letter from Jerusalem:
It's Time To Tell The Truth

"I will be direct: We are shouldering the burden of the Haredi public in every area of life."
Failed messiah was established and run in 2004 by Mr. Shmarya (Scott)Rosenberg. The site was acquired by Diversified Holdings, Feb 2016.