A Mother In Israel writes:

According to the religious Zionist weekly Matzav Haruach, the following sign appeared in a playground in the haredi neighborhood of Neve Yaakov in Jerusalem: 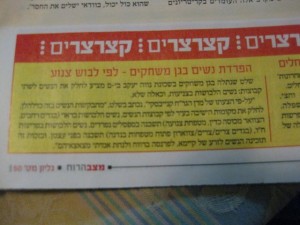 [A Mother In Israel's translation:]

According to the suggestion of our teacher the great rabbi H. Kanievsky [Rabbi Chaim Kanievsky, a son-in-law of Rabbi Yosef Shalom Elyashiv and a leading haredi rabbinic authority in his own right – Shmarya], women are requested as follows, to divide seating in the city according to groups of women. Women dressed appropriately (wide clothes, a properly covered neck, a modest scarf [MiI: to cover hair]) will sit on separate benches. Women dressed immodestly [bepritzut] Heaven forbid, (tight clothes/open collar/bandana) will sit by themselves. And in this merit the women [MiI: there's no question as to which women, even though the wording is vague] will merit viable offspring, a comfortable living, and true comfort [nachat] from their children.

Notice that the suggestion is not directed at women who wear pants, show cleavage, or (married women) who leave their hair uncovered. The target appears to be women who more or less follow the rules, but fall from the community standard or the standard of whoever wrote the sign. There is even a subtle dig at wigs, as they are not mentioned in the description of modest clothing. Wigs are verboten in more modest circles.…

I used to live in Neve Yaakov up the hill from that haredi neighborhood, and I still have friends who live there. I wonder if moving has crossed their minds…