Algerian children "abducted," taken to Morocco. Kidneys harvested there and then later sold in US and Israel, Iranian smear says.

The Jewish group is said to be connected to Israeli rabbi Levy Rosenbaum, who was recently arrested for direct importing human organs. 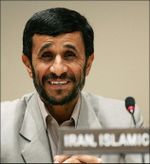 New reports have surfaced on the arrest of yet another Jewish organ trading gang in the United States involved in the abduction of Algerian children.

Dr. Mustafa Khayatti, the head of the Algerian National Committee for the Development of Health Research, revealed on Sunday that the New York city police have arrested members of a Jewish gang who abducted Algerian children for their organs.

Khayatti said the arrests came after Interpol found that children in western Algeria were abducted and taken to Morocco to have their kidneys harvested.

The group is said to be connected to Israeli rabbi Levi Rosenbaum, who was recently arrested in

New Jersey for the direct involvement in importing human organs.

Following Rosenbaum's arrest, US authorities detained some 44 others, including rabbis and mayors in New Jersey, who were prosecuted for money laundering and human organs trade.

Last month, a report published in the Swedish newspaper Aftonbladet, accused Israeli soldiers of kidnapping Palestinians in the occupied West Bank and the Gaza Strip for their organs, indicating a possible link between the Israeli military and the mafia of human organs detected in the US.

Some Arab countries have called for an international inquiry into the allegations. 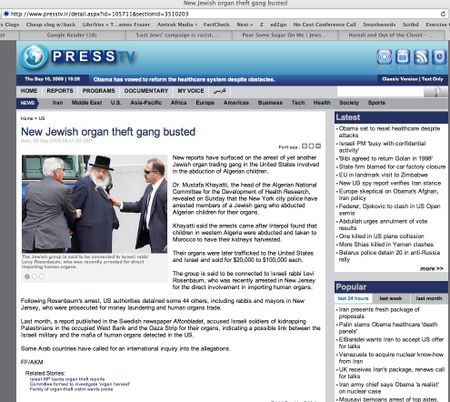 Posted at 06:46 AM in Antisemitism | Permalink

Algerian children "abducted," taken to Morocco. Kidneys harvested there and then later sold in US and Israel, Iranian smear says.
Failed messiah was established and run in 2004 by Mr. Shmarya (Scott)Rosenberg. The site was acquired by Diversified Holdings, Feb 2016.