Hitler Stole His Iconic "People's Car" Design From A Jew

Was Hitler's Beetle actually designed by a Jew?
By ELAN MILLER * Jerusalem Post

Until now, it has been widely acknowledged that the ever-popular Volkswagen Beetle has a tainted 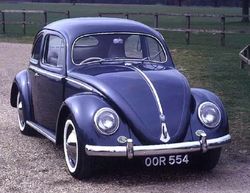 history, having been originally designed and commissioned by Nazi dictator Adolf Hitler. But could the history behind one of the most fashionable production cars ever be more complex? Paul Schilperoord, a Dutch journalist and historian, certainly thinks so.

Schilperoord alleges in his new book Het Ware Verhaal van de Kever ("The True Story of the Beetle"), to be released later this month, that Ferdinand Porsche's iconic Beetle, officially commissioned by Hitler, may well have been taken from a design by a Jewish engineer called Josef Ganz, who never received due credit.

In 2004, Schilperoord picked up an old edition of a magazine called Automobile Quarterly. In it, he discovered an article which claimed that, contrary to popular belief, the Beetle's original designer was not Hitler but rather a Jewish man, Josef Ganz. Intrigued by this assertion, Schilperoord embarked on what ended up as five years of extensive research which ultimately led to him publishing his forthcoming book.

Over the course of his investigations, Schilperoord unearthed the Beetle's true history - one vastly different from the one that the Nazi regime had us believe. Whereas the Nazi version of the Beetle's origins is that Hitler came up with the idea of a "People's Car," a car that would both cost less than 1,000 Reichsmark and simultaneously carry up to five people across the country at speeds of up to 100 kilometers per hour.

But Schilperoord's account differs sharply. He claims that Ganz had outlined the Beetle concept a decade before Hitler claimed to have conjured up the idea of the then-revolutionary automobile.

According to Schilperoord, "In 1929, Josef Ganz started contacting German motorcycle manufacturers for collaboration to build a Volkswagen prototype. This resulted in a first prototype built at Ardie in 1930 and a second one completed at Adler in May 1931, which was nicknamed the Maikäfer (May-Beetle)."

Ganz's design was greatly innovative, with features such as an independent suspension system for each wheel, which was "a revolutionary step for the 1920s," Schilperoord notes. With a rear-mounted engine and a unique, streamlined chassis, his car was highly distinctive, too.

Although Porsche and Hitler made no mention of Ganz's contribution, Schilperoord claims that "Hitler's" Beetle, which came into production 10 years later, could only have derived from Ganz's work.

Lacking the financial backing to put his project into action, Ganz was appointed editor-in-chief of a car magazine, Klein-Motor-Sport, and simultaneously took up positions as a technical consultant to both Daimler-Benz and BMW, where he "developed his first cars featuring independent suspension with them," Schilperoord told The Jerusalem Post over the telephone last week.

In 1933, Schilperoord claims, came the decisive moment when Hitler happened to be in attendance at the IAMA (Internationale Automobil- und Motorradausstellung) Berlin motor show in which Ganz unveiled the Maikäfer's successor, the "Standard Superior," which was built by German company Standard Fahrzeugfabrik.

Hitler liked what he saw, and tasked Porsche with the job of creating a similar car, but in line with his anti-Semitic philosophy, "he obscured the fact that a Jew was behind the car's design," Schilperoord told Post.

Schilperoord also claims that there are too many of Ganz's hallmarks to be in any doubt that the Beetle that was eventually mass produced in the 1930s was derived from his original design. "Even the name Volkswagen was originally Ganz's," noted Schilperoord.

Ganz "was already working on the Volkswagen in the 1920s in Germany... already using the name [Volkswagen] in the Twenties," he said.

Later on in May 1933, the Gestapo arrested Ganz on falsified charges, accusing him of blackmailing the German automotive industry. "Hitler had only been in power for a few months and was already setting about arresting people and creating the dictatorship he dreamed about," explained Schilperoord.

Even though Ganz had friends in high places and was released soon after being taken into custody, his career had been dealt a fatal blow. His contracts with BMW and Mercedes were terminated, he lost his job as editor-in-chief at the magazine. The Standard Fahrzeugfabrik, which had recently released a new model with place for a family with two children, was now forbidden to use the name Volkswagen in its advertising; Ganz's livelihood had been destroyed.

If the Nazis were discouraged by the setback of Ganz's discharge from prison, they didn't show it. During The Night of the Long Knives in June 1934, when the regime carried out a series of political executions, with most of those killed being members of the Sturmabteilung (SA), the paramilitary Brownshirts, an assassination attempt was made on Ganz's life. Fortunately for Ganz, his pet dog, an Alsatian, heard the would-be attacker enter the house and jumped on him, thus saving his master's life.

Not long later, a second assassination attempt was made. Again Ganz had a lucky escape; he happened to be in Switzerland at the time on vacation. When friends warned him that it was not safe to return, Ganz decided to stay on in Switzerland till after the war.

While in Switzerland, Ganz fought to restore his name and claim ownership of the Volkswagen concept, to no avail. Schilperoord claims that even once the war was over and Ganz was free to work on "a new small car for Automobiles Julien, he could no longer compete with the German Volkswagen - his own vision - which was now conquering the world in its hundreds of thousands and within a few years in its millions.

"A weary Ganz," according to Schilperoord, "moved to Australia in 1951 and lived there till his death in 1967. Hopefully now, history will restore his name as the true designer of one of the most revolutionary cars in history."

Hitler Stole His Iconic "People's Car" Design From A Jew

Josef Ganz created and designed the Volkswagen Beetle, new book shows.
Failed messiah was established and run in 2004 by Mr. Shmarya (Scott)Rosenberg. The site was acquired by Diversified Holdings, Feb 2016.