Sometimes life reads like a Daily Show satire. This is one of those times.
A Mother In Israel reports:

Yated Neeman has a letter from Rabbi Moshe Wye on a little-discussed halachic issue for Sukkot:  Insects falling from your s’chach into your food. [See note below.] The Hebrew text appears on the Jerusalem Kosher News blog.  I summarized the most important points below:

“Permanent” s’chach, usually made of bamboo and stored from year to year, is the most likely to have bugs. S’chach of all types, whether old or new, needs to be checked. Rabbi Wye advises spreading out a white surface such as paper or a tablecloth, holding the branches at an angle, and banging them on the ground. The white surface should then be examined for bugs.

If you see small insects, spray the s’chach with insecticide. A few hours later, shake the s’chach to disperse the dead insects. A brush or vacuum cleaner can help remove them.

Lyctine beetles, dark brown and about three millimeters long, often infest dry s’chach. They chew narrow tunnels under the thin skin of the bamboo stalks, and you can see round holes on the outside of the stalks. If  you find these, use a professional exterminator and ask for a guarantee. If the infestation is large, don’t use the s’chach at all.

To store s’chach from year to year, spray with insecticide, let dry completely, and wrap in a sealed waterproof plastic bag. Check again after opening.

Note: During the week-long festival of Sukkot (Tabernacles) beginning October 2, observant Jews eat and often sleep in a temporary booth, called a sukkah. The roof is made of branches or other vegetation, known as s’chach. Aside from hygienic issues, bugs, whether dead or alive, are not kosher.

Think of all that insecticide dropping down into the food – and on to the people – below. A strong breeze or a bit of light rain could put enough poison in the people sitting below to cause cancer. 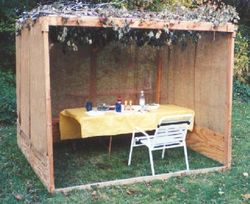 Jews (or whatever we were called back then) did not sit in succas or observe the current rituals of Sukkot until the time of the Second Commonwealth when Ezra and his men miraculously 'recovered' lost parts of the Humash, Five Books of Moses – which itself up until a few years before the Destruction of the First Temple had been only four books, not five.

Without getting into the pathology here – although it does clearly resemble the pathology of the Na Nach Breslov sect and the founding or Mormonism – if you're going to sit in a rickety booth to recall an Exodus that probably never happened as claimed anyway, do so safely.

Don't sit in the rain (or snow, as the case may be) and eat (Chabad). Don't sleep in a succah if doing so is dangerous (i.e., parts of LA, NYC, etc.). Save the insecticide for healthier use. Don't leave candles unattended or light them on plastic or cloth tablecloths.

And, instead of checking your s'chach for bugs, check your rabbis for brains and common sense. If you don't find a strong combination of both, don't let them enter your succah or your life.

Posted at 07:04 AM in Halakha, Haredim, History, Israel | Permalink

The Jewish national camping / desert wandering reenactment now needs to be bug free.
Failed messiah was established and run in 2004 by Mr. Shmarya (Scott)Rosenberg. The site was acquired by Diversified Holdings, Feb 2016.