MK wants conversions for IDF soldiers to be more lenient than regular conversions.

A mouthpiece for haredi Ashkenazi rabbinic leadership blasted Shas MK Haim Amsalem on Monday for suggesting that conversion criteria for non-Jewish IDF soldiers should be more lenient than for other prospective converts to Judaism. 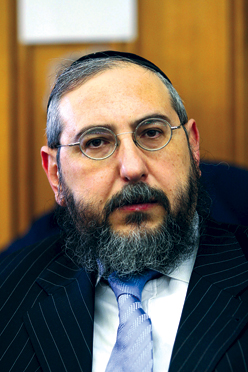 "Rabbis and rabbinical judges expressed their disgust with MK Haim Amsalem's impetuous and blasphemous declaration to apply leniencies when converting goyim from the former Soviet Union who serve in the IDF," the editors of Yated Ne'eman, a haredi daily representing the Lithuanian haredi rabbinical leadership, wrote in a biting article against the MK.

"Amsalem's claim that military service itself is tantamount to adhering to religious commandments is baseless and ridiculous," they wrote.

At the beginning of the week, a scholarly article written by Amsalem, who also serves as rabbi of a community in Geneva, was published by Ma'ariv. In the article, Amsalem argued that different, more lenient criteria should by applied to non-Jewish IDF soldiers interested in converting to Judaism.

To support his claim, Amsalem argued that many of the immigrants from the FSU, while not technically Jewish, had Jewish relatives. This allowed for a more lenient approach to their conversion, said Amsalem.

Unnamed rabbis and rabbinical judges were quoted by Yated Ne'eman as saying that Amsalem's comments were "a mockery of Halacha handed down from generation to generation that conversion necessitates full adherence to an Orthodox lifestyle."

Rabbi Nahum Eisenstein, an expert in conversions who is closely connected to the Ashkenazi haredi rabbinic leadership, said that Amsalem's controversial statements were a "publicity stunt" designed to advance his personal career.

Amsalem has announced his intention to leave politics and run for the slot of Ashdod chief rabbi.

"Amsalem has caused incalculable damage to the Orthodox position on conversions," said Eisenstein, who helped write the Yated article. "He gives the impression that our demand that every convert must accept the yoke of mitzvot is nothing but an unnecessary stringency. By saying those things while at the same calling himself rabbi, he is cheapening the rabbinical institution. He is worse than a Conservative Jew."

Amsalem issued a response at the beginning of week, saying that his opinions had been leaked to the press and that he had never intended to allow them to reach the wider public. Rather, he had sent the article to rabbis for feedback.

Amsalem's spokesman refused to answer questions by The Jerusalem Post. An SMS sent by the Post requesting an interview with Amsalem was answered, "Noooooooooo."

"[By] the very fact that these non-Jews are willing to risk their lives to protect the Jewish people, they prove their desire to be a part of the Jewish people," wrote Amsalem. "Thanks to IDF soldiers, tens of thousands of students can sit and learn Torah. That is enough to accept these non-Jewish soldiers as converts, and we are obligated to bring them closer and accept them with open arms.

"What an amazing merit these soldiers have to sanctify God's name and to protect the Jewish people in the Land of Israel against our enemies who wish to destroy us," he continued. "What merit they have, enough to accept them as converts to Judaism."

Some rabbinic opinions hold that conversion can be based on the prospective convert's desire to become part of the Jewish people.

This was the second controversial statement made by Amsalem in the past month. About three weeks ago, Amsalem drew fire from his fellow Shas MKs when, during a discussion of discrimination against Sephardi students in Ashkenazi haredi educational institutions, Amsalem sharply criticized senior Shas MKs for sending their children to elite Ashkenazi institutions instead of working to improve Sephardi institutions.

Amsalem enjoys more independence than most Shas MKs, since he receives the backing of Rabbi Meir Mazuz, head of Kise Rahamim Yeshiva. Unlike other MKs appointed by Shas mentor Rabbi Ovadia Yosef or his supporters, Amsalem answers to Mazuz, who is known for his right-wing positions on the Land of Israel. He has also received the backing of well-known kabbalist Rabbi Baruch Abuchatzira, known as the "Baba Baruch."

MK wants conversions for IDF soldiers to be more lenient than regular conversions.
Failed messiah was established and run in 2004 by Mr. Shmarya (Scott)Rosenberg. The site was acquired by Diversified Holdings, Feb 2016.