Rabbi Shmuel Rabinovitch insists men and women be separated, even in the plaza area outside the immediate confines of the Wall. 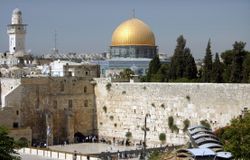 The Jewish Agency is considering whether to halt ceremonies granting identity cards to new immigrants at the Western Wall plaza after the rabbi of the wall said the immigrants must be segregated by gender, Haaretz has learned.

The ceremonies are part of a Jewish Agency initiative to speed up the citizenship process. As of this summer, newly arrived immigrants are taken to register for all the requisite services - such as health insurance and opening a bank account - on their first day in Israel and then to the Western Wall for a ceremony in which they receive their ID cards as Israelis.

Paula Edelstein, chairwoman of the Immigration and Absorption Committee at the Jewish Agency, told Haaretz the event takes place on the parade ground in front of the Western Wall, where men and women can pass freely. The ceremony would be mixed, with men and women sitting together.

But in late July, the Western Wall administration demanded the agency separate men and women at the ceremonies. It also demanded no ceremonies be hosted by women, and that the events must take place even further from the prayer area, on the pedestrian route across the plaza.

Edelstein said the agency was considering stopping the ceremonies at the Western Wall and noted that the last such ceremony took place at the Mount Scopus amphitheater of the Hebrew University.

Edelstein is a member of the Israel Religious Action Center of the Israel Movement for Progressive Judaism. The center's legal adviser wrote to the rabbi of the Western Wall, Rabbi Shmuel Rabinovitch, and to Religious Services Minister Yaakov Margi (Shas) to cancel the new request, saying it did not correspond with the sacred sites law.

"Forced segregation between men and women is humiliating and impinges upon personal liberties, including the very basic freedom to choose where a person takes his seat - such as with his family," the letter said. It noted that mixed ceremonies have "always" taken place outside the prayer area of the Western Wall plaza.

Conservative and Progressive Jews have long been struggling for the right to pray at the Western Wall as they see fit. There has been one appeal to the Supreme Court and several attempts at compromise; eventually Progressive Jews were allowed to hold their prayer ceremonies at the Robinson Arch area nearby.

Rabinovitch's letter of reply suggests he sees the Jewish Agency ID ceremony as a religious ceremony. "The permission we gave to hold the ceremony was only given because the Jewish Agency told us this was an event of joint prayer of those passing into the gates of the Land of Israel for the sake of their successful settling in the Holy Land... as such, this ceremony must be held in accordance with the relevant regulations, which demand segregation," Rabinovitch wrote. His letter concludes that unless the agency segregates men and women, the ceremonies should be held in the Progressives' prayer location.

Rabbi Shmuel Rabinovitch insists men and women be separated, even in the plaza area outside the immediate confines of the Wall.
Failed messiah was established and run in 2004 by Mr. Shmarya (Scott)Rosenberg. The site was acquired by Diversified Holdings, Feb 2016.