During the city council campaign, Isaac Abraham claimed to be a paramedic. But according to NY State, Abraham was only a basic level EMT whose certification lapsed in 1984.

In September, Isaac Abraham was asked the following questions by Ben Muessig of the Brooklyn Paper. [Emphasis added.]:

Q: What are some of the things you achieved over those 36 years?
A: Being a paramedic, dealing with families at a time of need, a time of stress and a time of pain. Delivering packages to poor people for the Sabbath. For affordable housing, there has not been a single person in this district that has been an advocate like I have. I have dealt with transportation issues when I forced the city to cover the Williamsburg Bridge with tarp when they were removing lead paint. I fought against the city’s largest incinerator in the Brooklyn Navy Yard.

Q: Your opponents question your ability to lead outside of the heavily Hasidic, though small, portion of the district. How do you respond?
A: People who have known me and the issues that I have addressed know that the location doesn’t matter. Affordable housing is something I have worked on — it doesn’t matter whether it is Kent Avenue, Sixth Street or Court Street. The street name changes, but it doesn’t change my energy and effort towards solving the problem.

Q: Describe yourself in seven words or less.
A: If it’s not right, I’ll fight. 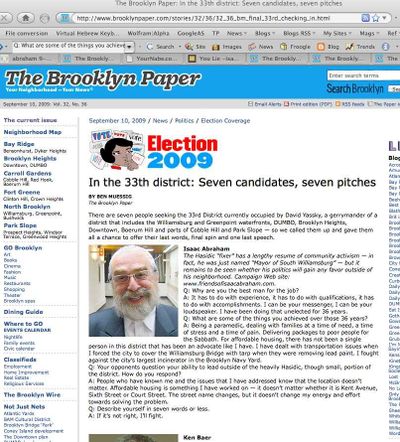 Was Isaac Abraham a paramedic?

Not according to New York State's Department of Health, which regulates and certifies paramedics: 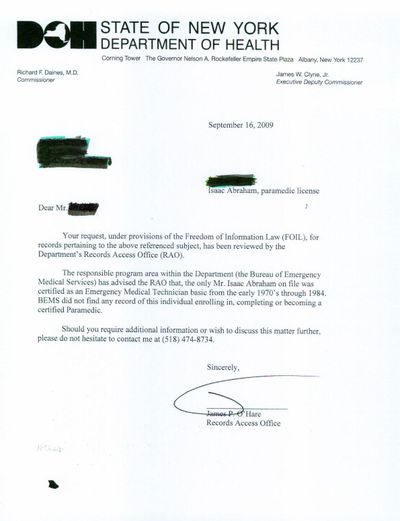 Abraham has never been a paramedic in New York State.

A paramedic goes through hours 1200 of training and must be regionally approved and credentialed, and also have medical oversight. "There's a lot of prestige tied to being a paramedic," Jonas said.

On the other hand, a basic level EMT – the lowest level pre-hospital responder – only has 250 hours of training, is not regionally approved or credentialed, and has no medical oversight.

In cases where people misrepresent their level of certification, even for seemingly benign reasons, that certification can be suspended or revoked. Even when certification is not current, that individual can be barred from ever reinstating it and that action can be publicized by the state. This has happened to others who have falsely claimed certification they lack.


Late this afternoon, I asked Isaac Abraham about his claim to have been a paramedic:

"They called it a paramedic, Abraham said. "I was a First Class New York State EMT."

"Is that the lowest class?" I asked.

"No. That was at that time the highest class of emergency medical technicians," Abraham responded.

"That was the highest?"

"Up until then it was only Red Cross courses and the Red Cross just basically gave basic training," Abraham said.

"So at that time the Red Cross gave the training and there were no levels and then it changed?" I asked?

I told Abraham that the New York State Department of Health lists him as a basic level EMT whose certification lapsed in 1984.

"By today's standards…there was only one level," Abraham said.

I asked Abraham if let his certification lapse before the New York State Department of Health instituted EMT levels.

"Yes, Abraham answered. But he was unsure of when his certification actually lapsed.

Abraham told me he thought that EMT levels were first added ten to twelve years ago.

The offices of the New York State Department of Health's Bureau of Emergency Medical Services were already closed and its personnel were unavailable for comment and no information about standards current in 1984 could be found on its website.

Abraham also dropped a bombshell – he still responds as a first responder to emergency medical calls and he does so across a broad geographic area for Hatzalah, a private ultra-Orthodox founded and run ambulance and first responder service regulated by the New York State Department of Health.

Hatzolah (there are various spellings used by local branches; all are affiliates of Central Hatzalah) was founded in Williamsburg, Brooklyn, New York in the late 1960s and bills itself as "the largest volunteer Emergency Medical Services and ambulance provider in the United States, with numerous branches serving communities throughout the United States and the world."

Here is what Abraham told me:

"I responded to a few calls on Yontiff, but not because I run – I'm retarded or retired, whatever you want to [call it]," he said.

"When you did that, you wouldn't go out as the responder of record, right? You went out by yourself or you went out with someone else?"

"When I did it? I went out by myself. I went out with two, three [others] – it just depended on the call," Abraham responded.

"You did that for Hatzaloh of Williamsburg?"

"So you still function as a first responder?"

"You've been doing this consistently since your certification lapsed in the 1980s?" I asked.

Having a non-certified person acting as a primary first responder is regulatory problem for the agency that person is responding for and could result in sanctions against the agency, in this case, Hatzalah.

"Hatzaloh was the first grade of EMTs. There were I think twelve of us from Hatzolah, the very first grade that was given for EMTs by the New York State," he said. 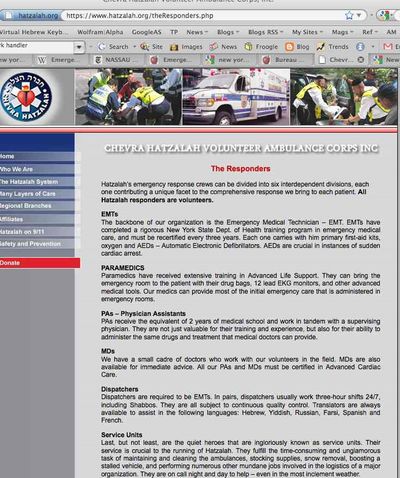 Here's the text of the portion of that webpage describing Hatzalah's EMTs and paramedics. [Emphasis added]:

Hatzalah’s emergency response crews can be divided into six interdependent divisions, each one contributing a unique facet to the comprehensive response we bring to each patient. All Hatzalah responders are volunteers.

EMTs
The backbone of our organization is the Emergency Medical Technician – EMT. EMTs have completed a rigorous New York State Dept. of Health training program in emergency medical care, and must be recertified every three years. Each one carries with him primary first-aid kits, oxygen and AEDs – Automatic Electronic Defibrillators. AEDs are crucial in instances of sudden cardiac arrest.

PARAMEDICS
Paramedics have received extensive training in Advanced Life Support. They can bring the emergency room to the patient with their drug bags, 12 lead EKG monitors, and other advanced medical tools. Our medics can provide most of the initial emergency care that is administered in emergency rooms.

Abraham fits none of these criteria.

Hatzalah also says it's first responders are provided with a "full compliment of lifesaving medical equipment":

Hatzalah first dispatches volunteers to the scene of an emergency in Emergency Ambulance Service Vehicles. These privately owned vehicles are equipped with appropriate emergency lighting and carry a full complement of life-saving medical equipment.

Yet Abraham told me his equipment is "bare to minimum."

Abraham asked how I became interested in his EMT status, and I told him I'd been given a tip.

"If the guy [the tipster] wants to pick on my words, tell him just to pray to God he doesn't need any level. Picking on my words at this time between Rosh Hashana and Yom Kippur if I am or not I can send you to the patients I've saved and they didn't ask me what level I am," Abraham said.

An after-hours call to Central Hatzalah's Brooklyn headquarters has not yet been returned.

UPDATE 12:00 pm 9-23-09 – I spoke with Dana Jonas of the New York State Department of Health's Bureau of Emergency Medical Services a few moments ago. Jonas tells me there were several EMT levels in the early 1980s when Abraham was still certified.

It appears that Abraham does not violate the law by responding – if he is not responding in a public area or space in a jurisdiction that forbids uncertified responders.

The bigger problem is how this impacts Hatzaloh, which could be in regulatory hot water due to Abraham's actions.

Hatzalah's central office has not responded to my requests for comment.

During the city council campaign, Isaac Abraham claimed to be a paramedic. But according to NY State, Abraham was only a basic level EMT whose certification lapsed in 1984.
Failed messiah was established and run in 2004 by Mr. Shmarya (Scott)Rosenberg. The site was acquired by Diversified Holdings, Feb 2016.