Did The Haredi Head Honcho Tell A Haredi Charity It's Okay To Lie To Raise Money?

Rabbi Yosef Shalom Elyashiv denies he said it, and the haredi newspaper that printed it retracted. But is it true? 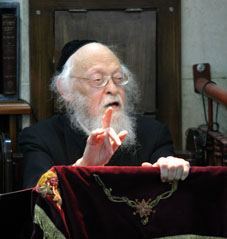 lead saying HaRav Eliyashiv shlita had permitted heads of Vaad HaRabbonim LeInyonei Tzedokoh to print stories that have little truth to them in order to persuade the public to donate generously for the sake of poor families supported by the fund.

HaRav Eliyashiv based the psak on the concept of “kofin al hatzedokoh,” said the article printed in Bakehila, a weekly based in Jerusalem.

Early in the morning the editors’ cell-phones were flooded with calls from irate askonim and rabbonim associated with Vaad HaRabbonim, claiming the article was unfounded. Some figures went to verify the report at HaRav Eliyashiv’s home, where it was denied outright.

With phones continuing to ring off the hook the editors decided to take a measure unprecedented in the paper’s 12 years of publication: the entire paper was reprinted, the original version was whisked off news

“Due to a mistake and misunderstanding by the reporter,” Bakehila Board Chairman Shmuel Meir Hirshman told Chadrei Chadarim, “it appears as if Maran HaRav Eliyashiv permitted tzedokoh committees to print inaccuracies. The paper’s oversight staff took note of the remarks, because any thinking person realizes that HaRav Eliyashiv could not have uttered such things. As a result the remarks were deleted from the body of the article and corrected. This can be seen in the body of the article, which appears on page 12 of the paper.

“Unfortunately, when the lead was printed on the front page, the original, erroneous version was pasted in,” Hirshman explained.

“As soon as we noticed what had happened we ordered the distributors to stop delivering the newspaper to stores. At the same time we printed a new edition, without the error.”

Reading between the lines, it seems plausible that Rabbi Elyashiv did say it's okay to lie in this context, as long as there is some basic truth to the story. (Think of it like a myth, perhaps.)

But having that publicized hurts haredi nonprofits, hence the anger from the nonprofit in question and from Rabbi Elyashiv's handlers who, above all else, don't want Rabbi Elyashiv to appear feeble or foolish.

Most of us are familiar with this modern-day haredi fable-making as ArtScroll 'biographies' and articles in the Jewish Observer (R.I.P.), Hamodia, Yated Ne'eman, Matzav.com, and other haredi publications, along with fundraising brochures from haredi institutions worldwide.

The important question is not whether this particular nonprofit made up stories or whether Rabbi Elyashiv approved those lies.

I think the evidence is Orthodoxy/traditional Judaism has played fast and loose with the truth for a very long time.

But it doesn't matter if you think otherwise.

What matters is Orthodoxy – at least haredi Orthodoxy – distributes fable and calls it truth.

That means you don't know whether the "historical" account you read is true or false, reality or a fairy tale.

And that means there is no mesora,

Did The Haredi Head Honcho Tell A Haredi Charity It's Okay To Lie To Raise Money?

Rabbi Yosef Shalom Elyashiv denies he said it, and the haredi newspaper that printed it retracted. But is it true?
Failed messiah was established and run in 2004 by Mr. Shmarya (Scott)Rosenberg. The site was acquired by Diversified Holdings, Feb 2016.