Seeing an antisemite behind every haredi crime and misfortune continues. 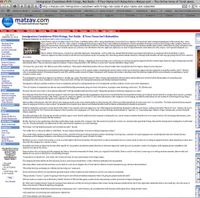 The haredi news site Matzav.com reprints the following New York Times article with (at least) one change – the headline, which Matzav.com has this way, the dash and everything after it being a Matzav.com addition:

Immigration Crackdown With Firings, Not Raids – If Your Name Isn't Rubashkin

The screenshot posted at right can be enlarged by clicking on it.
But the Times story proves that Matzav.com headline false.
Three points:

1. The Times piece documents the Obama Administration's change in immigration enforcement from raids to forced firing of undocumented workers. Agriprocessors, the Rubashkin's slaughterhouse and processing facility, was raided during the Bush Administration.

2. Agriprocessors was only one out of many companies raided during the Bush years. None of the other companies were identifiably haredi-owned or Jewish-owned. Agriprocessors was the second largest single site raid of its kind. The largest happened to a non-Jewish owned company, Howard Industries, in August 2008.

3. American Apparel, the subject of the firings highlighted in the Times piece, is known for paying its workers well above the garment industry standard and providing good benefits like affordable healthcare and massage breaks. Agriprocessors was known for abusing its workers: underpaying them, defrauding them, cheating them and in some cases sexually abusing them.

If haredim cannot understand the difference between these two companies or between the Obama and Bush Administrations, then one must question what, if anything, they are capable of understanding.
This is also ironic because just yesterday the American Jewish Committee released a study showing that the Orthodox community is far more anti-Obama than the non-Orthodox Jewish community. And it is Obama's kinder and gentler immigration enforcement policy haredim seem to be expediently endorsing.

Immigration Crackdown With Firings, Not Raids
By JULIA PRESTON • NYTimes

LOS ANGELES — A clothing maker with a vast garment factory in downtown Los Angeles is firing about 1,800 immigrant employees in the coming days — more than a quarter of its work force — after a federal investigation turned up irregularities in the identity documents the workers presented when they were hired.

The firings at the company, American Apparel, have become a showcase for the Obama administration’s effort to reduce illegal immigration by forcing employers to dismiss unauthorized workers rather than by using workplace raids. The firings, however, have divided opinion in California over the effects of the new approach, especially at a time of high joblessness in the state and with a major, well-regarded employer as a target.

Mayor Antonio Villaraigosa, a Democrat, called the dismissals “devastating,” and his office has insisted that the federal government should focus on employers that exploit their workers. American Apparel has been lauded by city officials and business leaders for paying well above the garment industry standard, offering health benefits and not long ago giving $18 million in stock to its workers.

But opponents of illegal immigration, including Representative Brian P. Bilbray, a Republican from San Diego who is chairman of a House caucus that opposes efforts to extend legal status to illegal immigrants, back the enforcement effort. They say American Apparel is typical of many companies that, in Mr. Bilbray’s words, have “become addicted to illegal labor.”

“Of course it’s a good idea,” Mr. Bilbray said of the crackdown. “They seem to think that somehow the law doesn’t matter, that crossing the line from legal to illegal is not a big deal.”

In July, the federal Immigration and Customs Enforcement agency, known as ICE, opened audits of employment records similar to the one at American Apparel at 654 companies around the country. John T. Morton, who, as assistant secretary of homeland security, runs ICE, said the audits covered all types of employers with immigrant workers, including many like American Apparel that were not shadowy sweatshops or serial violators of labor codes.

The investigation at American Apparel was started 17 months ago, under President George W. Bush. Obama administration officials point out that they have not followed the Bush pattern of concluding such investigations with a mass roundup of workers. Those raids drew criticism for damaging businesses and dividing immigrant families.

Immigration officials said they would now focus on employers, primarily wielding the threat of civil complaints and fines, instead of raids and worker deportation.

“Now all manner of companies face the very real possibility that the government, using our basic civil powers, is going to come knocking on the door,” Mr. Morton said.

The goal, he said, is to create “a truly national deterrent” to hiring unauthorized labor that would “change the practices of American employers as a class.”

The employees being fired from American Apparel could not resolve discrepancies that investigators discovered in documents they had presented at hiring and in federal Social Security or immigration records — probably because the documents were fake. Peter Schey, a lawyer for American Apparel, said that ICE had cited deficiencies in the company’s record keeping, but that the authorities had not accused it of knowingly hiring illegal workers. A fine threatened by the agency was withdrawn, Mr. Schey said.

After months of discussions with ICE officials, the company moved on its own to terminate the workers because, Mr. Schey said, federal guidelines for such cases were “in a shambles.” The Bush administration proposed rules for employers to follow when workers’ documents did not match, but a federal court halted the effort and the Obama administration decided to abandon it.

With its bright-pink, seven-story sewing plant in the center of Los Angeles, American Apparel is one of the biggest manufacturing employers in the city, and makes a selling point of the “Made in U.S.A.” labels in its racy T-shirts and miniskirts. Dov Charney, the company’s chief executive, has campaigned, in T-shirt logos and eye-catching advertisements, to “legalize L.A.,” by granting legal status to illegal immigrants, a policy President Obama supports.

Since the audit began, Mr. Charney has treaded carefully, eager to show that his publicly traded company is obeying the law, and to reassure investors that the loss of so many workers will not damage the business, since production has slowed already with the recession.

But Mr. Charney is also questioning why federal authorities made a target of his company. Over the summer he joined his workers in a street protest against the firings. Because the immigration investigation is still under way, Mr. Charney declined to be interviewed for this article but did respond in an e-mail message.

The firings “will not help the economy, will not make us safer,” he said.

“No matter how we choose to define or label them,” he said, illegal immigrants “are hard-working, taxpaying workers.”

On a recent visit to American Apparel’s factory floors here, amid the whirring of sewing machines and the whooshing of cooling fans, a murmur of many languages rose: mostly Spanish, but also Chinese, Korean, Vietnamese and Portuguese. Masseurs were offering 20-minute massages for sewers in need of a break.

But there was also a mood of mourning, as work was interrupted with farewell parties. The majority of workers losing their jobs are women, most of whom are working to support families. Many departing workers have been with the company for a decade or more.

Executives said many workers had learned skills specific to a proprietary production system that allows American Apparel to make 250,000 garments a week in Los Angeles, while keeping prices competitive with imports from places like China.

Some workers who are leaving said the company had been a close-knit community for them. Jesús, 30, originally from Puebla, Mexico, said he was hired 10 years ago as a sewing machine operator, then worked and studied his way up to an office job as coordinating manager.

“I learned how to think here,” said Jesús, who would not reveal his last name because of his illegal status.

The company provides health and life insurance, he said, and he earns about $900 a week, with taxes deducted from his paycheck.

Like many others, Jesús said his next move was to hunt for work in Los Angeles. He will not return to Mexico, he said, because he is gay and fears discrimination.

“There they treat you and judge you without even knowing you,” Jesús said.

He said several job offers from mainstream garment makers in this country had been withdrawn once he was asked for documents.

“Being realistic,” he said, “I guess I’m going to have to go to one of those sweatshop companies where I’m going to get paid under the table.”

ICE has made no arrests so far at the factory. But Mr. Morton of ICE said the agency would not rule out pursuing workers proven to be illegal immigrants.

Mr. Schey said company human resources managers had added new scrutiny to hiring procedures. But workers facing dismissal pointed to the line of job applicants outside the factory one recent day, who, like many of them, were almost all Spanish-speaking immigrants.

“I think the Americans think that garment sewing is demeaning work,” said Francisco, 38, a Guatemalan with nine years at the plant who is being forced to leave.

A top supervisor, he is training new employees to replace him.

Seeing an antisemite behind every haredi crime and misfortune continues.
Failed messiah was established and run in 2004 by Mr. Shmarya (Scott)Rosenberg. The site was acquired by Diversified Holdings, Feb 2016.