It should go without saying the behavior of this schochet is reprehensible.

But I saw nothing in the video past the behavior of that schochet toward the woman that was in any way cruel or incorrect.

I think we can break down the woman's claims this way:

1. Kapparot are unnecessary and therefore inherently cruel because chickens that would otherwise run free are caged, transported and then killed.

2. Alternatively, those chickens are cruelly raised and transported and using them for kapparot perverts the ritual.

3. Therefore, if one wants to do kapparot, one should do it using money rather than a chicken.

4. Anyone who does kapparot with a chicken is: a) in violation of the halakha, b) cruel, and c) worthy of condemnation.

5. Her grandfather, a "kosher butcher," never did kapparot with chickens and therefore, by implication, was not involved in animal cruelty.

Most of these claims are incorrect and illogical – unless you believe all animal slaughter of any kind is forbidden by halakha and immoral.

Therefore, the slaughter of chickens during the kapparot ritual does not contravene Jewish law – unless those chickens are tossed in the garbage rather than being plucked, cleaned, koshered and given to the poor.

Halakha is divided on the ritual itself.

Sefardim, following Rabbi Yosef Karo, author of the Shulchn Aruch, do not do kapparot – except that Sefardim who are kabbalistically-minded often do.

Ashkenazim, following the Rama – the halakhic baseline for Ashkenazic practice – do kapparot.

Hasidim do kapparot, both because they are Ashkenazic and because the Rabbi Isaac Luria – the Ari, a Sefat contemporary of Rabbi Yosef Karo – did kapparot. (This is also why some Sefardim, as noted above, do kapparot.)

For those who do kapparot, using a live chicken is preferable, as long as the shechita is done in front of them as they watch. If that cannot happen, money would, I think, be the better option.

For people who do kapparot but who find the slaughter too difficult to watch (or who dislike holding chickens, or who are vegetarians), using money is perfectly acceptable.

Because kapparot is a custom, observance varies widely, both between the general groups mentioned above and within them.

Jews have many customs that are not mentioned in Tanakh or the Talmud, and we have many mentioned in those works that we do not keep, just as we have many fast days mentioned in ancient texts that we no longer keep. This is part of the normal halakhic process, despite what this woman seems to be claiming.

She also claims her grandfather was a "tzaddik" and he never did "anything" like this. But she also says he was a kosher butcher.

Judging from the woman's voice, I'd say her grandfather would be 100 or more years old if he were alive today. That means he was a kosher butcher 70 years ago.

It was far more cruel than it is today.

Because there was no ASPCA pen in 1939. Animals schechted 70 years ago were restrained in one of two ways:

1. Shackle and hoist – i.e., hanging the animal from the ceiling from one hind leg using a chain. This was extremely painful.

2. Casting – meaning the animals legs were individually roped and then, using several men, the animal was pushed over on its back (tripped, so to speak), and restrained with those ropes and by pulling on its snout.  This was less painful than shackle and hoist (but still much more painful than modern methods of restraint) but slower and more dangerous for the schochet and his helpers. This method was often used when animals were slaughtered at butcher shops, which was still common in the 1930s.

Fowl were often slaughtered at butcher shops in exactly the same way they are slaughtered for kapparot now.

So this woman's grandfather, the "tzaddik," participated in and profited from the same cruelty this woman now condemns others for.

Rabbinic concern regarding kapparot has almost always centered on rushed slaughter and the fear that knives won't be properly checked as a result.

I think it is correct and also reasonable to extend that concern to tzaar baalei hayyim issues, as well.

Rabbinic leaders should at bare minimum mandate humane transport and storage of kapparot chickens with adequate food, water, sun protection and space given.

A strong case can also be made to use only certified humanely raised birds for kapparot. At a time when we as God to be merciful it is wrong, I think, to use inhumanely raised chickens for the symbolic expiation of sin

Look at it this way: If a farmer in biblical times beat and tortured his plow animals, would God be happy with the grain offerings brought by this farmer? Or would God view the offerings as tainted?

I think we can all agree it would be best to avoid that situation and any situation resembling it.

Perhaps this will be the next innovate move in the kosher business: certified humanely raised organic free range kapparot with shechita supervised not only by reputable rabbis, but also by a humane slaughter expert like Dr. Temple Grandin. And the pre and post-slaughter handling should be supervised by food safety and health experts, as well.

I think this would be quite popular and would actually be profitable if staged in a convenient location in or near NYC.

I think PETA would support an effort like this, and I think many rabbis will, as well.

UPDATE 1:40 pm CDT – Yeshiva World has pictures from Kapparot in Mea Shearim. I'll post three below, two showing  problems and one not. Please click to enlarge.

Bad (the type of cage used): 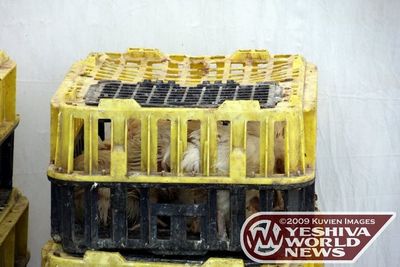 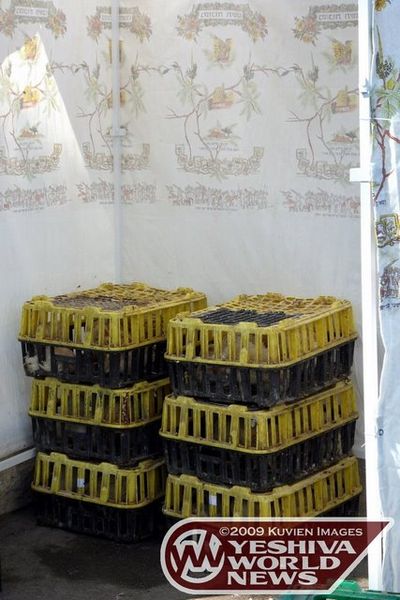 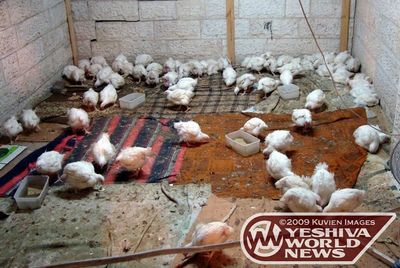 Are kapparot done with live chickens inherently cruel and therefore in violation of tzaar baalei hayyim law?
Failed messiah was established and run in 2004 by Mr. Shmarya (Scott)Rosenberg. The site was acquired by Diversified Holdings, Feb 2016.