Kiev - A Hasidic Jewish pilgrim bit a Ukrainian policeman while other pilgrims smashed a television camera in a row over kosher food, Channel 5 television reported Thursday. The incident took place in the central Ukrainian city Uman', a pilgrimage site for one of the nine main branches of Hasidic Judaism. 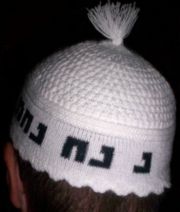 The conflict began after Uman' police attempted to shut down a group of kiosks operated by the pilgrims, according to the report citing Svetlana Lipinska, an Uman' city official.

The owner-operators said they were providing kosher food acceptable to Hasidic teachings, unavailable elsewhere in Uman'.

The Ukrainian law enforcers alleged the kiosks were not registered businesses, violated city health codes, and should be shut down.

One kiosk operator bit a policeman's finger, and others smashed a camera operated by a local television station, as law enforcers moved to dismantle the kiosks.

Police intervention came after city officials consulted with pilgrimage organizers, and according to a Unian news agency report were told by Daniel Dayan, a leader of Uman's Hasidic community, that the kiosk operators were engaged in business outside normal pilgrimage activities.

The central Ukrainian city Uman' is the site of an annual pilgrimage by some 25,000 members of the Hasidic branch of the Jewish faith during Rosh Hashanah, the Jewish New Year.

One of the leading early activists of the Hasidic movement, Rabbi Nachman of Breslov, is buried in Uman'. A visit to his grave is the highpoint of a pilgrimage to the city.