Ilan Ramon was killed when the Space Shuttle Columbia crashed in 2003.

Tragedy strikes the Ramon family again from the air. Lieutenant Assaf Ramon, son of Israeli astronaut Ilan Ramon, was killed Sunday when the F-16 fighter jet he was flying crashed just south of Mount Hebron during a routine training exercise.  Rescue forces found the remains of the 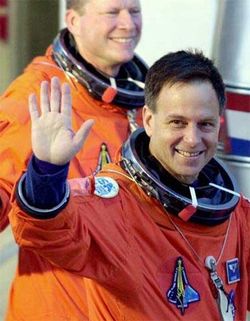 fighter jet and Ramon's body in the surrounding area.

Following his death, the Israel Defense Forces decides to promote Assaf to the rank of captain.

At 4:30 pm, Rona Ramon received the news she feared most. Her eldest son, Assaf, who recently completed the IAF's pilots' course, was killed in a training accident Sunday afternoon. Her son's dream to be a pilot like his late father, Ilan Ramon, the first Israeli astronaut, was cut short in circumstances horrifically similar to his father's death. Six years after his father's death when his space shuttle crashed as it returned to earth, Assaf Ramon met a similar fate.

In the past hours, friends and family have flooded the family's home to offer comfort to the mourners. Classmates of Yiftach, Assaf's younger brother, gathered in a square next to the family's home. Their teacher reported that they are sitting and crying together in the square as they share memories of Assaf.

Michal Weiss, a resident of Maale Hever who witnessed the crash, told Ynet, "I left the garden and went home. It was approximately 1:45 pm. Suddenly there was a loud sound of a plane.

Planes pass by here all the time, but this sound was unusual. It was too loud. And then I heard a loud whistle. There was a ball of fire that rose up, and then I saw the huge mushroom cloud and sudden silence."

Weiss added, "At first I thought a rocket landed. I continued on and met a friend, who also said she saw a mushroom cloud. Then the other show dropped for me – a plane blew up. We immediately reported the event. Within a few minutes, there were planes and helicopters here."

Tali Aviv, who studied together with Assaf, said, "He simply was a hero and an amazing person – genius, smart, and talented. He always smiled and was always surrounded by friends. He told us that he wants to continue in his father's path, but I didn't know he would also continue the tragedy. He always stood out in class with a big smile."

"He was good-hearted and helped everyone. He excelled at school just as he did in the military and pilots' course. It can truly be said that he was a good kid. I have a lot of memories of him. He is the kind of person you don't forget."

"They say I am following in my father's path, but I am here for myself and not for anybody else," Assaf said in an interview with the air force's journal just before the end of pilots' course. "I was found to be fit for the position, and I am happy about that because this is the place I feel I belong."

Assaf continued, "When I got to the course, I didn't know where it would lead. Before decisions were made, I was nervous like everyone else. My heart pounded like crazy, and I really wasn't sure I would pass. Even throughout the course I didn't feel like the treatment I got was any different than the treatment given to the other cadets. I was happy about this."

Assaf's widowed mother, Rona, authorized her son's participation in the pilots' course. "I presume it wasn't easy for her, but she supports me and wouldn’t want to hold me back from doing something I chose," said Assaf to the IAF journal.

Assaf's father, Ilan Ramon, also completed the pilots' course with honors some 35 years ago. He achieved the rank of colonel and was chosen by NASA to become the first Israeli to fly into space. Ilan Ramon managed to make history, but the Colombia space shuttle he was in crashed as it returned to earth in 2003.

Assaf was 15 when he lost his father. Even then, he announced his desire to follow in his path and become a pilot.

Ilan Ramon was killed when the Space Shuttle Columbia crashed in 2003.
Failed messiah was established and run in 2004 by Mr. Shmarya (Scott)Rosenberg. The site was acquired by Diversified Holdings, Feb 2016.