Ancient Synagogue Found: Among Oldest In World, It May Reveal Secret Lost For 2,000 Years

A synagogue from the Second Temple period (50 BCE-100 CE) was exposed in archaeological excavations the Israel Antiquities Authority is conducting at a site slated for the construction of a hotel on Migdal beach, in an area owned by the Ark New Gate Company. In the middle of the synagogue is a stone that is engraved with a seven-branched menorah (candelabrum), the likes of which have never been seen. The excavations were directed by archaeologists Dina Avshalom-Gorni and Arfan Najar of the Israel Antiquities Authority.

The main hall of synagogue is c. 120 square meters in area and its stone benches, which served as seats for the worshippers, were built up against the walls of the hall. Its floor was made of mosaic and its walls were treated with colored plaster (frescos). A square stone, the top and four sides of which are adorned with reliefs, was discovered in the hall. The stone is engraved with a seven-branched menorah set atop a pedestal with a triangular base, which is flanked on either side by an amphora (jars).

According to the excavation director, Dina Avshalom-Gorni of the Israel Antiquities Authority, “We are dealing with an exciting and unique find. This is the first time that a menorah decoration has been discovered from the days when the SecondTemple was still standing. This is the first menorah to be discovered in a Jewish context and that dates to the Second Temple period/beginning of the Early Roman period. We can assume that the engraving that appears on the stone, which the Israel Antiquities Authority uncovered, was done by an artist who saw the seven-branched menorah with his own eyes in the Temple in Jerusalem. The synagogue that was uncovered joins just six other synagogues in the world that are known to date to the SecondTemple period”.…

The synagogue holds the secret of the Temple Menorah.

Does it look like the menorah on the Arch of Titus which depicts the aftermath of the Destruction of the Second Temple? 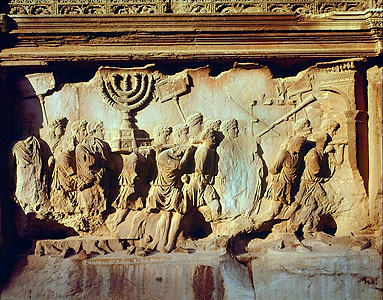 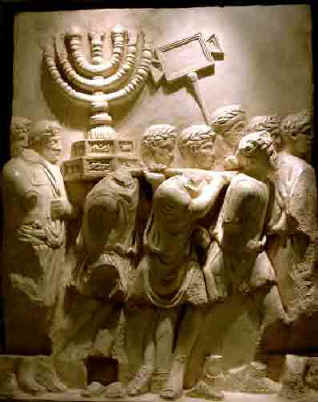 Or does it look like the Rambam's understanding of the menorah? 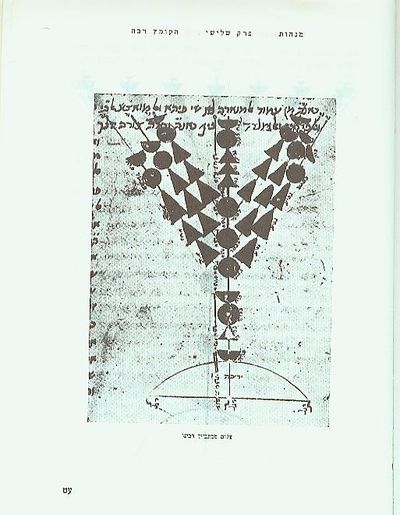 Or does it look like the late Chabad-Lubavitch Rebbe's understanding of the Rambam's version of the menorah? 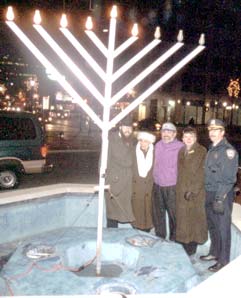 Or does it look like the menorah on the Hasmonean coin? 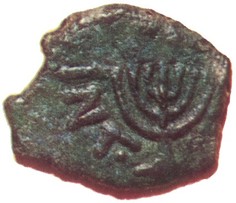 Which menorah does the one found carved in this 2nd Temple-era synagogue resemble? 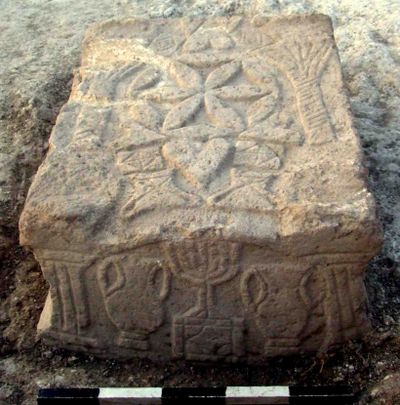 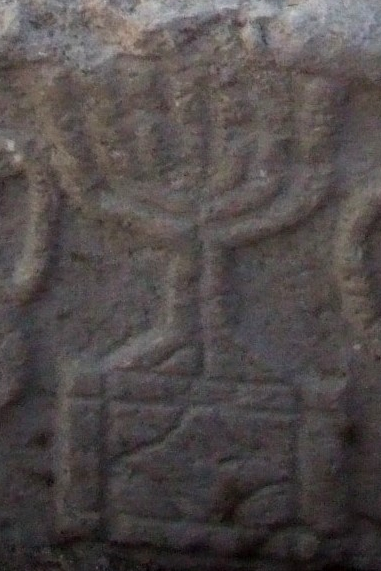 I think this answers the question raised about the menorah on the Arch of Titus.

That menorah has what appears to be a double six sided base, one base resting on top of the other and then the menorah on top of that.

If you look closely at both the coin and the synagogue menorahs you can see that the depiction of the feet shows that the menorah had six or eight feet:

Here is what is think took place:

The Temple menorah was placed in the Temple on a square base of gold. This may have been an addition during Herod's rule, or it may have been added during the original rebuilding of the Temple after the return of some Jews from Babylonian captivity.

Because Hasmonean coins don't show the base, I think it is likely the base was an addition during Herod's time, but it is also possible the hasmoneans – who were kohanim, priests, and who served in the Temple and clearly saw the menorah up close – viewed the base as added decoration, and therefore saw its historical and religious value as being much less than the menorah itself. That could be an alternative explanation for why the base is not depicted on their coins.

That menorah and its base were taken to Rome by Titus, carried by Jews captured in Judea when the Temple was sacked and destroyed.

In order to keep the menorah safely together with its base – which may have been viewed by Titus as more impressive and/or by the Jews as being necessary for the honor of the holy objects – the menorah and base were joined together, perhaps by fusing them with gold melted down from other Temple objects or from the Temple treasury. This fusion may have been viewed by the Jews as temporary and therefore permissible and, under the circumstances, desirable.

When the menorah got to Rome, the artist whose sketches (or whose memories) were used as the basis for the Arch of Titus would have seen the six or eight feet of the menorah fused by this additional gold to the base, which could have given this structure a look similar to the structure of what we see depicted on the Arch of Titus.

I think this might answer the question of the shape of the base of the menorah in the Arch of Titus.

I also believe this find shows clearly that the Rambam's understanding of the menorah's shape is incorrect, as is the late Lubavitcher Rebbe's.

Posted at 11:53 AM in Chabad, Hanukkah, History, Israel | Permalink

Ancient Synagogue Found: Among Oldest In World, It May Reveal Secret Lost For 2,000 Years

What secret does this ancient relic hold for today's Jews, especially today's Chabad Jews?
Failed messiah was established and run in 2004 by Mr. Shmarya (Scott)Rosenberg. The site was acquired by Diversified Holdings, Feb 2016.