Will The Treasure Of The Temple Be Found?

American claims to have cracked the code of the Copper Scroll leading to hidden gold and silver from the Temple.

"Shelley, I want you to meet the guy who has cracked the code on the Copper Scroll." With that intriguing introduction, I shook hands with Jim Barfield. We stood among the kiosks of Israeli goods during a lunch break at a Christian Zionist conference in Forth Worth, Texas.

"Congratulations," I replied, "but what's the Copper Scroll?"

"A treasure map," Barfield answered, "from the prophet Jeremiah." 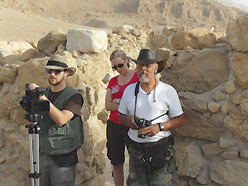 I gave Barfield and his companion a quick once over, trying to determine whether they were the well-intentioned kind of crazy or scary crazy. A small-town Oklahoma man with impressive posture, Barfield sported long (really long) gray hair and a full goatee. His partner in "The Copper Scroll Project" is Chris Knight, another long-haired fellow who speaks softly and possesses a gentle demeanor. He shares the same look of confidence and conviction that Barfield exudes as they brief me on the Scroll.

The Copper Scroll was discovered in 1952 in one of the Qumran caves along the Dead Sea. Though part of the official Dead Sea Scrolls Collection, the Copper Scroll differs from the others in that it is written entirely on thin sheets of alloyed copper rather than papyrus or leather. Furthermore, the Copper Scroll is neither scriptural nor literary, but rather a detailed list of approximately sixty locations where vast amounts of gold, silver, coins, vessels, and other religious artifacts are hidden. Such Temple treasures might also include the Ark of the Covenant.

THE SCROLL was found rolled in two parts and badly oxidized. Fearing it would crumble like thin glass, experts debated for four years over the best way to open it. Finally the Scroll was sent to a lab in Manchester, England where they cut it into twenty-three strips with a high-speed saw. Photographs of the strips were taken, and then, since the scroll had been found during an expedition sponsored by the Jordan Department of Antiquities, the pieces were sent back to the country.

There are several theories as to the origin of the treasure listed in the scroll, and to whom it belonged. While one theory labels the find simply as an ancient hoax, equally popular is the belief that the artifacts on the list are in fact treasures from the Second Temple. Supporters of the latter scenario theorize that the Temple items were hidden just before the Roman army, led by Titus, surrounded the walls of Jerusalem.

However, the theory to which Barfield ascribes - and most Dead Sea scholars reject - is that the scroll is neither a hoax nor a remnant of the Second Temple period, but rather was created during the First Temple period. His hypothesis derives from the Second Book of Maccabees, as well as a lesser known seventeenth century book called Emek Hamelech ("Valley of the King"). These two works tell the story of the prophet Jeremiah who, with the help of five Holy men, one named Shimur Halevi, carefully hid the holy objects of the Temple to protect them from the conquering Babylonians, and documented those locations on a copper tablet.

The Copper Scroll is a difficult text to understand. Written in an early form of Mishnaic Hebrew, many of the words used in the Scroll are unfamiliar to scholars because they do not appear in any other biblical or rabbinical texts. The scribe's handwriting is sloppy and hurried, forcing paleographers to make competing guesses as to the scribe's intention. Most of the locations detailed in the Scroll are obscure references, and are too narrow in their specificity to be known outside of that time period. The list speaks of tombs, dry wells, caves, and pools belonging to forgotten people and places.

For example, the Scroll writes "Sixty-five bars of gold lie on the third terrace in the cave of the old Washer's House," and again, "Seventy talents of silver are enclosed in a wooden vessel in the cistern of a burial chamber in Matia's courtyard." Adding to the puzzle, next to seven of the locations listed on the Scroll, there are two or three random Greek letters. I asked Barfield if somehow he had discovered the identity of the "old Washer," or if he found a secret code associated with the Greek letters. He said cracking the code was more direct than that. "Others have applied too much of their pre-conceived theories," he said, "and just get lost in the details."

BARFIELD IS not the typical biblical researcher, and is the first to admit that he lacks the Indiana Jones background one would expect. He has no prior knowledge of the language, archaeology, or geography of the region. Instead, he is a retired Oklahoma Fire Marshal who once excelled in investigating arson. While he had become familiar with the Copper Scrolls while previously reading a biblical chronology, he said that he had been "totally bored by it," and casually labeled it "just a list of kosher metals."

His outlook on the find changed one morning in December 2006. Following a conversation with Vendyl Jones, a man rumored to be the inspiration for Spielberg's Indiana Jones, and who himself had been searching for the treasures listed on the artifact, Barfield chose to revisit the ancient text.

When investigating arson, he tried to prove everyone innocent by eliminating the fringe factors. This experience served him perfectly with the scroll. "I eliminated the fringe and matched up the fingerprints," he said.

After looking at the scroll for five minutes he deciphered the first location, and twenty minutes later he identified the next four locations. He and his wife took their first trip to Israel to confirm whether the sites and places that he had identified actually existed. "I wanted to make sure I wasn't just imagining things," Barfield said. It took six months for Barfield to crack the code for the rest of the locations.

Once again applying his experience as a fire marshal, Barfield packaged up his research in the style of an arson investigative report. He then boarded a plane, and delivered his report directly into the hands of the Israel Antiquities Authority (IAA) in Jerusalem. Given his lack of archeological background, his Christian faith, and the fact that the IAA confronts treasure hunters every day, I asked if they treated him skeptically. "Once they saw my report," he replied laughingly, "they just moved me to the head of the class."

He says that all of the archaeologists, rabbis, and historians presented with his research have been convinced. "It is so simple." He says. "They just all thump their heads."

He has been to Israel four times subsequently, meeting with an archaeologist from the IAA who is committed to the expedition. While an abundance of red tape is normally standard when organizing an expedition in the most religiously sensitive and politically fragile climate in the world, Barfield secured a permit with relative ease, and will be searching for one of the Scroll's priority locations beginning this winter.

BARFIELD SAYS he is 99 percent certain that he has identified 56 of the 60 locations of the Copper Scroll; the other four he maintains only slight reservations. He readily admits, however, that he can not be sure the sites have not already been found and looted over the last 2,000 years.

Between 160-200 tons of gold and silver potentially lurk under the Judean hills and Negev sands. Their estimated worth is over $2 billion today. Whatever the tonnage may be, the significance of the archaeological discoveries would be far greater than any monetary value. Barfield notes that the Copper Scroll offers the greatest chance ever to locate lost sacred objects used for worship in the first Jewish Temple.

Both Barfield and Knight describe themselves as Torah observant Christians with a sincere love for Israel and the Jewish people. Their central desire in getting involved with the Copper Scroll was to return the treasure of the Scroll to its rightful owners: the nation of Israel. In a phone interview with Barfield we discussed the implications of actually finding something on the expedition. I also noted that the finder's fee for such an achievement would be considerable. "If God has selected me to do this," Barfield replied, "He gave it to a guy that just doesn't give a darn about wealth.

"My children and grandchildren love God and I just want it to stay that way," he continued. "I want to return these items to Israel and what they do from that point is up to them."

Whether or not Barfield has solved this ancient mystery is yet to be proven, but after hearing his story I can't help but wish he is indeed "the guy who cracked the code on the Copper Scroll."

Shelley Neese is managing editor and columnist for the DC-based pro-Israel Christian magazine, The Jerusalem Connection.

Will The Treasure Of The Temple Be Found?

American claims to have cracked the code of the Copper Scroll leading to hidden gold and silver from the Temple.
Failed messiah was established and run in 2004 by Mr. Shmarya (Scott)Rosenberg. The site was acquired by Diversified Holdings, Feb 2016.