Rabbi Shmuel Herzfeld is a member of the only movement of mainstream American Judaism that views homosexuality as an issur d’oraita.

When Zvi Bellin, a gay Washingtonian, heard that a vigil was being organized by members of the gay and Jewish communities in the Capitol to memorialize the victims of the Tel Aviv gay youth center shooting, he decided to invite Rabbi Shmuel Herzfeld. Herzfeld, who leads the modern 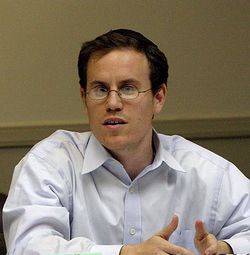 Orthodox Ohev Sholom synagogue in Dupont Circle, is a member of the only movement of mainstream American Judaism that views homosexuality as issur d’oraita, something that is proscribed by the Torah. Thousands of years after the Jewish holy text was transmitted from God’s mouth to man’s ears, Orthodox Judaism’s classification of sexual relations between people of the same gender remains unerring: “an abomination.” But whatever the conservative doctrines of his faith, Herzfeld recognized an important Jewish value at stake in the Tel Aviv massacre: that some Jews would take halakhic prohibitions against homosexuality to mean that homosexuals are themselves an abomination and thus unworthy in the eyes of God.

“I said it would be my honor,” Herzfeld told me about the invitation offered by Bellin, who is gay and attends Ohev Sholom. Herzfeld turned what would have been a somber commemoration of a tragedy into an inspiring, even newsworthy, event. In his brief speech, he called upon Orthodox congregations to…

Posted at 04:18 PM in Homophobia and its Discontents, MO & Chardal | Permalink

Rabbi Shmuel Herzfeld is a member of the only movement of mainstream American Judaism that views homosexuality as an issur d’oraita.
Failed messiah was established and run in 2004 by Mr. Shmarya (Scott)Rosenberg. The site was acquired by Diversified Holdings, Feb 2016.