« In Power Struggle With Police, Haredi Leader Orders Jews To Stay Away From Kotel On Shabbat | Main | Rabbi Ovadia Yosef: Judges Who Sentenced Shas MK To Prison For Corruption And Theft "Apostates" »

Dnepropetrovsk, August 19, Interfax – Head of the Kharkov Jewish Orthodox community, who staged his own kidnapping after losing over $1 million at the London Stock Exchange, was found in Dnepropetrovsk. 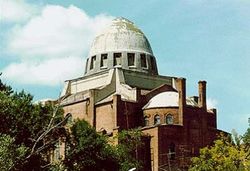 Press service of the Ukrainian Security Service for the Dnepropetrovsk Region has told it on Wednesday.

Disappearance of the community head was reported by his father. The men should have met near a bank in the central street of Kharkov, where the son was going to convey his father $100,000. However, the son did not turn out at the appointed time.

According bank officials, the disappeared did not visit their financial institution, though his car was found near the bank. The son’s mobile phone was switched off, he did not call back. Police initiated a criminal case. They considered versions about kidnapping and robbery. The Jewish community turned to the Ukrainian Security Service for help in searching their leader and the Service officials managed to find him on the forth day.

They cleared out that the victim initiated the kidnapping himself. He was found safe and sound in an apartment building in a residential district of Dnepropetrovsk.

When questioned, the Kharkov resident confessed that he came to Dnepropetrovsk on his own will, trying to avoid financial claims as he lost over $1 million at the London Stock Exchange. To obtain money for speculating on the stock exchange, he pawned six flats of the religious community to banks.

Posted at 11:04 AM in Crime, Litigation, etc., Jewish Leadership | Permalink

Man lost more than $1,000,000 on London stock exchange, tried to hide from debts.
Failed messiah was established and run in 2004 by Mr. Shmarya (Scott)Rosenberg. The site was acquired by Diversified Holdings, Feb 2016.