The Shame Of Israel:
Elderly Holocaust Survivor Homeless In The Holy Land

Yevgeny was 3 when he was taken to the killing fields at Babi Yar. His father was murdered. His mother was shot. Yevgeny survived, married, had a family, earned a living. Then he moved to Israel. Now the 71 year old is homeless in the Holy Land.

For the last eight months, a 71-year-old Holocaust survivor has been sleeping on a bench in a downtown Tel Aviv park.

Yevgeny Bistrizky was three years old when he was taken to the killing fields at Babi Yar. His father was murdered. His mother was shot before his eyes, but survived. He has no recollection of how they escaped; he only knows that no one else from his family did. He remembers the long march through the snow, the hunger, the bodies piled up all around him. But he survived, married, had a family, earned a living. 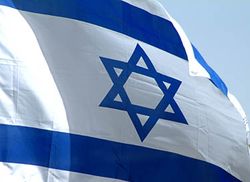 Every night, after finishing his job as a janitor, he comes to the park in the luxury Beeri Nahardea housing project, not far from Ichilov Hospital, to sleep. Early each morning, he leaves. He said he chose this park because of its ritzy location: Should anyone attack him, he said, the neighbors would surely call the police.

All his belongings are in one satchel - a rolled-up mattress, two shirts, two pairs of pants. In a plastic bag, he has soap and some food. It is very important to him that he not look like a bum: He shaves every day; his shirt is neatly tucked in. He washes himself and his clothes at a tap in a nearby building.

"It will be harder in the winter," he says. "In the summer, everything dries instantly."

Yevgeny moved to Israel in 1993 with his wife and daughter. He lived and worked in Ariel, but then the factory that employed him closed. Then he found work in Tel Aviv, so the family moved there.

Two years ago, he was fired from that job, and after that, everything fell apart. He separated from his wife; his daughter went to study in Germany. He returned to Ariel, but no one would rent an apartment to an unemployed senior citizen with no collateral or guarantors. He found an abandoned Amidar apartment (public housing) that had no electricity or running water, but eight months ago, he was evicted.

Officials in Ariel advised him to go to Tel Aviv, saying its welfare department was excellent. He did, but got no help.

He found a cleaning job that pays NIS 2,000 a month, and he also has his Israeli old-age allowance and the monthly 270-euro pension that he has received from Germany for the last three years. But he still cannot find anyone willing to rent him an apartment, given his age and his lack of collateral and guarantors. So he sleeps in the park.

His has not told his daughter about his plight. When she calls his cell phone, he describes a very different life.

Yevgeny speaks very little Hebrew. But this week, one couple managed to communicate with him and promptly called Latet, a nonprofit that helps the needy. The organization has helped more than 1,200 Holocaust survivors over the last three years, but Yaron, who is helping Ivgeny, is dumbfounded by this case.

For four solid hours, he called the emergency hotlines of various towns in the center of the country, but at each, got only a recorded announcement saying they were on vacation. The same was true of the towns' welfare departments. Finally, he reached someone in Tel Aviv's welfare bureau, who directed him to a homeless shelter in Jaffa. But after seeing it, they took the advice of the drug addict at the door and returned to the park. It was no place for a drug-free 71-year-old.

The Ariel municipality said Yevgeny is not eligible for government housing until his divorce is finalized - which he lacks the money to do, quite aside from the fact that it usually takes months.

Finally, a pre-army academy in Tel Aviv agreed to give him a room for a few days. On Wednesday night, he slept there, and could not stop gushing over the clean sheets. The question is what will become of him tomorrow.

People will tell you Jews are very charitable people and, to an extent that is true.

But charity that doesn't come with great honor doesn't seem to attract many of us. If our name (or the name of a family member to be memorialized) isn't prominently displayed, the money doesn't flow.

But even within that paradigm, Israel's treatment of its elderly is shameful, as this Ha'aretz piece so clearly demonstrates.

It's hard to attach a plaque to an elderly Holocaust survivor.

The Shame Of Israel:
Elderly Holocaust Survivor Homeless In The Holy Land

Yevgeny was 3 when he was taken to the killing fields at Babi Yar. His father was murdered. His mother was shot. Yevgeny survived, married, had a family, earned a living. Then he moved to Israel. Now the 71 year old is homeless in the Holy Land.
Failed messiah was established and run in 2004 by Mr. Shmarya (Scott)Rosenberg. The site was acquired by Diversified Holdings, Feb 2016.