An inside report on the infighting that causes various factions to fight for internal support by fighting police, the state and each other.
Askanim (singular: askan) are community activists.

According to a Chareidim report, the ongoing events in the Eida are in no small part due to the

While the controversy has been kept inside for the most part, the most recent pashkavilim which appear this week represent a new phase, perhaps a crack in the usual Eida discipline, but now, it appears the underlying issues are surfacing and becoming known to the public, albeit in small measure. Some of the matters being addressed became evident to YWN-Israel in the hours of discussion with prominent rabbonim and gabba’im in Meah Shearim mom case, with some hinted to in reports while other matters omitted.

Eida askanim are not in agreement regarding just how Kever Rashbi should look when the work is completed, leading to controversy. The common denominator is the fact the askanim all oppose 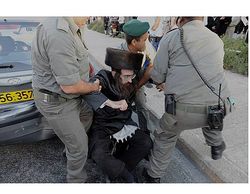 state control over the kever, realizing the state is seeking to change the kever to a tourist site, a move the Eida strongly opposes. Eida askanim and rabbonim do not wish to see the kever become a tourist attraction, which will result in visits from many non-Jews.

Regarding control of Kever Rashbi, many people and organizations involved with the site over the past decades declared they are in charge, compelling the court to hand down a final ultimatum, what is referred to as the Committee of Five, composed of four hekdeshim and a state representative, who in this case is HaRav Shmuel Rabinowitz, rav of the Kosel and holy sites. Accepting the position placed the rav in a difficult position, and he has since been the target of slander and verbal abuse in pashkavilim. Perhaps out of character, the Eida decided to accept the verdict and appoint its representative, despite the reality it will place the Eida in a situation in which it deals directly with a state official and agency.  Rav Mordechai Yitzchak Lichtenstein of ‘Kadmoneinu’ was appointed instead of Yoav Avraham, who was all but certain the Eida would select him.

The slander campaigns surrounding the appointments reached new heights, with supporters of R’ Lichtenstein targeting Atra Kadisha official HaGaon HaRav Smeidal, with those in the know explaining it was just a continuation of the ongoing dispute between the organizations surfacing

again. Some explain the renewed conflict justified the actions of Gavaad HaGaon HaRav Y.T. Weiss Shlita to break away from the Committee of Five, whose representatives include HaRav Bentzion Kupershtuk, HaRav Avraham Yisrael Freilich (who is viewed as loyal to Rav Smeidal). In time, Freilich became a trusted emissary of the Gavaad and acted on his behalf in numerous public matters.

During R’ Lichtenstein’s tenure on the Committee, a storm erupted around the refurbishing of the Ohel Moshe Cave and despite the fact the work was carried out under the watchful eye of a Badatz mashgiach, HaRav Tziper, and under the guidance of HaGaon HaRav Moshe Sternbuch Shlita, buses with protestors were sent from Jerusalem and Beit Shemesh to save the holy site from the renovations. With R’ Freilich back on the Committee, the storm seems to have dissipated despite the fact that the renovations continue, the roof has been removed and the famous candle lighting area destroyed forever, and for the first time ever, the site was closed during the bein hazmanim period.

With the recent reports regarding the Aaron Kodesh and the sifrei torah that fell, leading to a meeting of Eida leaders, resulting in the special tefilla service on erev rosh chodesh Elul in 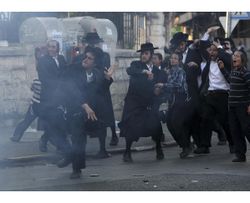 Meron.  R’ Lichtenstein’s supporters maintain no one listens to them and they were never permitted to make their case in front of the rabbonim from the Eida, adding the battle is being led by a small number of young fanatics, who cannot be stopped by anyone. They add the entire incident is an embarrassment to the rabbanim of the Eida, pointing out that despite days of calls to the tzibur to come to Meron on erev rosh chodesh to participle in the tefilla, some 200 people adhered to their cry, no more. They add that even mispalalim who were in the kever when the Badatz tefilla began did not even decide to join in, adding no one paid attention to the event.

Some of the Eida’s recent successes include the thousands who attended the Birchas HaChama tefilla, the protests on behalf of the Meah Shearim mom, and the ongoing shabbos protests against Karta parking lot and Jerusalem City Hall. Insiders explain the Eida must keep these going as a testimony to their control, strength and support among the tzibur. In the case of the Meah Shearim mom, the widespread support has been dwindling to a relative trickle, with few occupying themselves with the issue on a day-to-day level.

In the case of the latter, R’ Lichtenstein and his loyal follower R’ Freilich have entered the picture with the help of their mutual colleague R’ Amram Teitlebaum and Nachum Atik, who succeeded in ousting other Eida askanim who were dealing with the case of the mother. They feel the Eida’s image was severely tarnished by its dealing with the case, appearing as gangsters and using 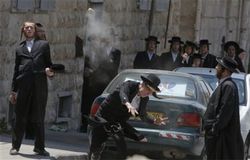 brutality as a means towards achieving a goal, resulting in mud-slinging that left the Eida tarnished in the eyes of its tzibur as well as the entire chareidi population.

The internal strife is not over, and the battle now shifts to the Mishkan Sarah Girl’s School, which enjoys total support of Gavaad Weiss, who supports the principal, R’ Aaron Ze’ev Cheshin. Bentzion Heller and Nachum Chanun, who oppose Cheshin’s actions, expressed outrage over his decision to bring in an assistant aligned with the Masmidim faction, resulting in thousands of girls from the “old yishuv” without a roof over their heads, uncertain where they will learn in this year.

It appears regarding the shabbos protests; the young guard has stepped in and is calling the shots, having pushed the elder askanim aside in this affair.

The combination of mounting internal conflict has resulted in this week’s pashkavilim, resulting in a visible increase in conflict as the Eida tzibur takes sides in the ongoing disputes.

An inside report on the infighting that causes various factions to fight for internal support by fighting police, the state and each other.
Failed messiah was established and run in 2004 by Mr. Shmarya (Scott)Rosenberg. The site was acquired by Diversified Holdings, Feb 2016.