Haredi Soldier Who Threatened To Kill Gays Kept In Jail

A Jerusalem court on Sunday extended by three days the remand of an Israel Defense Forces soldier suspected of making terrorist threats against the organizers and attendees of a gay solidarity rally held in Tel Aviv Saturday. 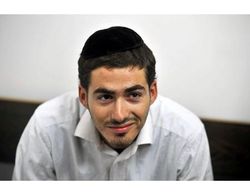 The soldier, Shmuel Freimark, serves in the Nahal Haredi unit of the IDF. While under questioning Saturday, Freimark confessed to making the threats.

Throughout the day Saturday, operators of transportation to the rally received telephone threats, including one caller who threatened to bring grenades to the demonstration.

A similar threat was received by organizers of transportation from Haifa. Gal Zberger, who organized a Peace Now bus to take demonstrators from Haifa to Tel Aviv, said: "I got a phone call from a number I didn't recognize. He asked for details regarding the bus. I gave him the details and asked for his name. He said 'the one with the grenade.' I asked what he meant, and he said 'today you will get hit with grenades, not just guns.'"

The police are investigating and hope to determine the source of the threatening calls.

Haredi Soldier Who Threatened To Kill Gays Kept In Jail

Serves in haredi army unit.
Failed messiah was established and run in 2004 by Mr. Shmarya (Scott)Rosenberg. The site was acquired by Diversified Holdings, Feb 2016.