The city, the scene of haredi attacks on National Religious and secular Jews, is rapidly becoming a stronghold of Mea Shearim haredim.

Some 100 Beit Shemesh residents protested on Sunday against the municipality's plan to open four classes for ultra-Orthodox students at the secular "Languages and Cultures" school. 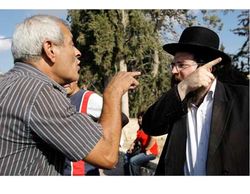 The demonstrators, mostly students who attend the school, called on Mayor Moshe Abutboul to resign and waved signs reading, "This isn't Bnei Brak" and "Beit Shemesh is not a haredi city."

According to resident Talia Avian, the mayor threatened to cut the school's transportation budget should it refuse to open the haredi classes.

"He told the principal and the parents that if they ignored his decision the coming year would be the school's last," she said.

Avian dismissed the mayor's claims that the school is located in the heart of a haredi neighborhood. "The Ramat Beit Shemesh A neighborhood is not ultra-Orthodox; it is made up predominantly of a secular and national religious population," she said.

"This is part of a plan to turn Beit Shemesh into the most haredi city in Israel."

Tatyana Iluz said, "In addition to all the anxiety surrounding a child's first day in school – I now learn that he will be studying near classes with students who belong to the Gur hasidic sect.

"We demand a long-term solution. The school should not be closed. I want my son to finish elementary school there," she said.

"The haredi and secular populations don't get along. Look at what is happening in Jerusalem, where the recent haredi protests may lead to civil war."

The City of Beit Shemesh said in response that the school has the capacity to house 480 students, but only 180 are registered there. Some 75% of the students attending "Languages and Cultures" are not residents of the neighborhood, which is religious in character.

"The city's haredi community suffers from a shortage of 250 classes; many ultra-Orthodox children are currently taught in caravans or rented apartments under inhumane and hazardous conditions," said the municipality.

What underpins this fight – besides the fact that Mea Shearim haredim have flocked to Bet Shemesh and brought with them modesty patrols and other thuggery – is the growth of the haredi population.

Over the weekend, Ynet reported almost half of Israel's student population is either haredi or Arab. This has severe implications for the future of the state:

"In comparison with the 25 OECD countries who participated in the 2006 PISA assessment exams, which test the most important core subjects – math, science, and reading – the average performance of the Jewish population are at the bottom of the list. The performance of Arab Israelis was even worse.…"grades of Arab-Israeli students were lower by 14% than the Israeli average. Haredi students didn't even participate in the exam. No other country omitted such a large part of its population from the international exams, while no state-wide curriculum is enforced in the haredi sector."

The reason no state-wide curriculum is enforced in haredi schools is because haredi have refused to teach math, science, English and civics and refuse to agree to any state-imposed mandatory curriculum. Haredi have threatened to bring down the government over this issue, and view any imposition of non-religious subjects of study as a type of heresy.

This means haredi students cannot as a whole function in the modern job market.

The same problem exists in many hasidic schools in the United States, as Rabbi Yair Hoffman noted on VIN News in the wake of the money laundering-organ trafficking scandal last month.

Hoffman pointed out that secular studies in these schools often stop by Grade 6. He also noted that of all the banks in Borough Park – including a bank owned by hasidim – only one teller is hasidic. Why? because, he notes, hasidim do not have the math skills necessary to do the job.  And being a bank teller is far from a high end job requiring advanced math skills.

In America, this creates an underclass of haredim dependent on charity and government programs to survive.

While this is bad fro America, to be sure, and even worse for the American Jewish community, it does not immediately threaten America's existence or security. What it does is create a lot of work for groups like Footsteps and drain Jewish community resources that could be better spent, while increasing the welfare burden paid for, in part, by all of us, Jew or gentile.

But that is not true for Israel, where the threat is severe and immediate.

Here's the Ynet report on the demographic issue and its implications:

The public schools system is growing weaker, and very soon Israel's classrooms will be filled with students from the Arab and haredi sectors, according to a forecast published Sunday by the Taub Center for Social Policy Studies in Israel.

In honor of the new school year, which begins Tuesday, the Taub Center published statistics Sunday showing rapid demographic change in Israel's schools within the last year. According to the center, these change necessitate an urgent change in the Education Ministry's policies and a concentrated effort to develop basic skills for working in a modern economy and an open society.

"Israel's character has changed drastically within the last decade, and the Education Ministry must start planning accordingly," said Taub Center Executive Director Prof. Dan Ben-David. "The level of education that the future majority – Arab Israelis and haredim – is receiving is significantly lower than Western standards. This has far-reaching consequences on the future of the country."

In light of these changes, the Taub Center recommends that the government focus on developing a designated curriculum for the populations who will represent a majority of Israeli classrooms in another generation with a concentrated effort on developing basic skills for working in a modern economic and in a developed society.

Prof. Ben-David believes that Arab and ultra-Orthodox students do not receive the basic skills that would allow them to contend in the international arena. "In comparison with the 25 OECD countries who participated in the 2006 PISA assessment exams, which test the most important core subjects – math, science, and reading – the average performance of the Jewish population are at the bottom of the list. The performance of Arab Israelis was even worse."

Approaching the point of no return
According to Ben-David, "The grades of Arab-Israeli students were lower by 14% than the Israeli average. Haredi students didn't even participate in the exam. No other country omitted such a large part of its population from the international exams, while no state-wide curriculum is enforced in the haredi sector."

"One of the problematic implications of the study is on the Israeli job market," the report concluded. "The levels of employment among Arabs and haredim are significantly lower than what is accepted in developed countries, and their average salary is lower as well. In this context, the Education Ministry is said to have a significant role in establishing the levels of employment and salaries of its graduates."

According to the center, the level of education provided as of today to these two groups indicates "a socio-economic path that will not be sustainable in the future."

"A government that does not drastically improve the education system in the very near future by putting particular and significant emphasis on improving the quality of education provided to these two educational sectors will bring the country closer to the point from which it will not be possible to change the direction of the existential implications of such," concluded the Taub Center.

The Taub Center for Social Policy Studies in Israel defines itself as "an independent, non-partisan, socioeconomic research institute."

The Elephant In The Haredi Room.

The city, the scene of haredi attacks on National Religious and secular Jews, is rapidly becoming a stronghold of Mea Shearim haredim.
Failed messiah was established and run in 2004 by Mr. Shmarya (Scott)Rosenberg. The site was acquired by Diversified Holdings, Feb 2016.