Rabbi Yaakov Weiss allegedly sexually abused 2 boys and kicked and beat one of them.

ALBANY -- A Loudonville rabbi was arraigned in Albany County Court today on charges he not only sexually abused two 13-year-old boys in 2007, but repeatedly slapped and kicked one of them. 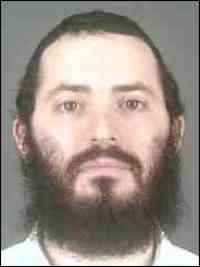 Yaakov Weiss, 29, founder of the Chabad of Colonie and the Chabad Hebrew School, also allegedly tried to convince one of the two youngsters to lie about the sex abuse to his mother and police.

"Just say nothing happened," Weiss told the child on June 30 on Sycamore Street in Albany, according to a four-count indictment.

Weiss, who already faced charges is City Court, was hit with the superseding indictment on Aug. 14, which alleges he victimized the children throughout 2007.

He faces up to one year behind bars on misdemeanor charges that include sexual abuse and child endangerment.

The dark-bearded rabbi pleaded not guilty before Judge Stephen Herrick as his wife and young daughter looked on from the gallery. Free without bail, Weiss later exited the courthouse, his wife by his side and daughter in his arm.

It alleged that sometime between Jan. 1 and April 30 in 2007, Weiss repeatedly slapped one 13-year-old on the back on New Scotland Avenue, "knocking him to the ground and then kicked him in the leg."

The court papers say Weiss sexually abused one of the boys in June 2007, the other between Nov. 1 and Dec. 31 of that year. Both incidents allegedly took place at 340 Whitehall Rd. in Albany, which is the Sidney Albert Albany Jewish Community Center.

In both cases, June, the indictment alleged, Weiss had sexual contact "consisting of placing his penis in contact with said child's buttocks." It allegedly took place inside a pool known religiously as a mikveh, according to his attorney.

The indictment said one of the boys sought advice from Weiss, his teacher and spiritual leader, on Sycamore Street on June 30 that year.

Weiss allegedly "instructed the child to be untruthful" and to "not tell his mother or the police about an incident where the defendant subjected the victim to sexual contact."

Arnold Proskin, the lawyer for the rabbi, told reporters the allegations are baseless. He said one of the victims is the son of another rabbi with a possible ax to grind against his client.

Asked why the case went from City Court to Albany County Court, Proskin said, "Press coverage," adding, 'I'm being serious. There's no advantage (to it)."

Weiss moved to the Capital Region from Iowa in 2004. He adheres to a branch of Judaism known as Chabad-Lubavitch, which is known for its work to get Jews more involved in their religion. Last October, Rabbi Yehuda Krinsky, chairman of Merkos L'inyonei Chinuch, the educational arm of the Brooklyn-based worldwide Lubavitch group, told, the Times Union the rabbi was suspended. He added it was in "no way whatsoever implicating him or an admission or a decision of guilt."

UPDATE 4:30 PM CDT – I forgot to mention that Rabbi Yaakov Weiss is one of the board members of Chabad's Sholom M. Rubashkin Defense Fund.

Rabbi Yaakov Weiss allegedly sexually abused 2 boys and kicked and beat one of them.
Failed messiah was established and run in 2004 by Mr. Shmarya (Scott)Rosenberg. The site was acquired by Diversified Holdings, Feb 2016.