If the term "sweatshop" used to be associated with Asian countries and global brands such as Nike, now such methods of production by exploiting workers have made aliyah. Two Israeli entrepreneurs run a sweatshop in Jordan that produces clothes for leading Israeli brands such as Irit, Bonita, Jump and Pashut, Haaretz has learned. 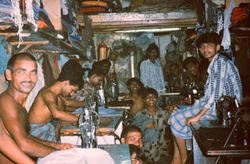 The report exposes what is said to be one of the biggest secrets of the Israeli fashion industry, saying the cheap production costs for Israeli labels is a very expensive price for workers' rights at Musa Garments.

The report says Mr. Musa, the owner, is an Israeli. But the real owners are Jack Braun and Moshe Cohen from Tel Aviv. The factory is located in the Al Hassan industrial area in Irbid, Jordan. The two employ 132 people from Bangladesh, 49 from India and 27 Jordanians. Chinese, Sri Lankans and Nepalese have also worked there in the past. "They all come for one reason only: To earn as much money as they possibly can to pay off the debts they incurred to purchase their three-year work contracts in Jordan, and send money home to their families," states the report.

The report explains how the "guest workers" face inhuman conditions from their first day. Management takes away their passports, sometimes for the entire three-year period. Workers who asked for their passports back - or at least a copy - were refused, an illegal act and serious human rights violation.

The conditions are close to slavery. Until December 2008, when the economic crisis hit the company, workers averaged shifts of between 12 and a half and 13 and half hours a day, seven days a week - even though their contracts give them Fridays off. They also had to work on Jordanian national holidays. Anyone who missed a shift was fined three days' wages, the report claims.

After December last year, the pace of production was stepped up and instead of having to sew 30 pieces an hour, workers were made to sew 40 - for the same wages.

"The public must know that products have a heavy human cost too," said Dr. Roi Wagner of the Kav LaOved (Worker's Hotline) organization. "The pursuit of lower production [costs] is very often dependent on violating human rights. The price is paid by Israeli workers whose jobs disappear, and also by the 'cheap' workers who produce goods in places where it is easier to abuse them. The manufacturer is not the only one responsible, but also the companies [that buy the goods] and the consumers," said Wagner.

The list of complaints is long, including subhuman living conditions such as 4-8 people in a tiny dormitory room, no showers and water for only an hour or two a night. There is no heat in the rooms in the winter, and the bathrooms are filthy. The roofs leak.

One of the owners, Jack Braun, claims the truth is completely different. "The report is a total lie," he said. "The workers went on strike for a reason I don't know. As a result, human rights organizations arrived and the workers lied - though every one of their claims was proved false. They attacked the Bangladeshi consul and police who tried to talk to them. The conditions we provide them, in terms of work and food and housing, are above and beyond. We always paid them as required - they earn tiny salaries, so why shouldn't we pay them?" said Braun.

Bonita's management said they do not work with the company.

Kobi Hayat, one of the owners of Pashut, said: "I do not know of the place since we work through a subcontractor who receives the material from us, manufactures in Jordan and returns the clothes. I have never been there, and I do not know who receives the work, so it is hard for me to discuss the claims."

Posted at 01:42 AM in Israel, Kosher Business? | Permalink