"If I was brought into this world only to help the Ethiopians that is enough for me."

Education Minister Gideon Sa'ar on Monday equated the segregation of Ethiopian students in Petah Tikva to "ghetto" conditions, saying the refusal of a number of the city's schools to accept Ethiopian students was an issue which represents "a battle for Israel's identity."

At the meeting, convened to discuss the crisis, Sa'ar aimed sharp criticism at the conduct of the Petah Tikva municipality and the semi-private schools. "This touches not only on the three schools that have, for a long time, been deceiving the entire educational system. For years racism has developed here undisturbed," he said, noting that nobody had addressed the issue.

"We've come to the point where today there is a school, Ner Etzion, which only Ethiopian students attend," Sa'ar said. "This is how we are dealing with immigration to Israel in 2009 - a school which, in my eyes, is a type of ghetto. This is what we've come to."

In parallel, Chief Sephardi Rabbi Shlomo Amar announced that it was forbidden to send Ethiopian students to the secular school system. 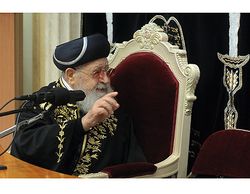 "If I was brought into this world only to help the Ethiopians that is enough for me", said Yosef on Monday morning during a meeting with Amar in his home in Jerusalem's Har Nof neighborhood, according to Amar's spokesman.

The spokesman said the chief rabbi ruled that it was forbidden to integrate the Ethiopians in secular state schools because many were Falashmura who were still in the process of converting to Judaism.

"If one of those children comes before a rabbinical court to convert and he or she does not know anything about Judaism it will be problematic", said Amar's spokesman.

Yosef, considered the greatest living Sephardi authority of Jewish law, was the first major-league rabbi to recognize certain groups among the Ethiopians as full-fledged Jews. Many have been integrated into Shas's Mayan Hachinuch Hatorani.

"Anyone who refuses to accept Ethiopians should get up and go home", Yosef said according to Amar's spokesman.

The spokesman said that in an agreement reached with the Petah Tikva municipality, Shas's schools would help absorb the Ethiopian students.

The rabbis' comments came a day after the Education Ministry nixed a deal reached between the Petah Tikva municipality and the city's schools on the enrollment of some 100 students of Ethiopian origin. The Education Ministry had said that it would find a solution that would enable the immigrant children, who have been refused admission into three semi-private religious Petah Tikva schools, to begin the school year normally on Tuesday.

The ministry has also decided to pull the funding from the Lamerhav, Da'at Mevinim and Darkei Noam schools, the three semi-private institutions that refused to accept the students.

Two demonstrations will be held Monday to protest against the schools' refusal to enroll the Ethiopian children, a refusal that has been widely perceived as a case of racial discrimination and was harshly criticized by Israeli leaders.

On Sunday, Prime Minister Binyamin Netanyahu spoke out against the rejection of Ethiopian children in schools, calling it "a moral terror attack."

An Ethiopian oleh organization is planning a demonstration in Jerusalem, while a parents' organization will protest outside the Petah Tikva municipality building.

The Knesset Education Committee will hold a special hearing on the matter on Monday afternoon.

The city's parents' council has threatened to strike and disturb the opening the new school year on Tuesday.

Meanwhile, more than 100 parents and students are protesting in Petah Tikva. Five have been arrested for blocking traffic:

Some 100 students and their parents demonstrated in Petah Tikva against the schools' lack of willingness to accept the city's Ethiopian students.

They moved between various junctions in the city, blocking traffic in protest. They carried signs emblazoned with slogans such as "Enough with discrimination," "Enough with racism," and "Since when do schools teach racism?"

Until now, no city official has left City Hall in order to make a statement.

"I praise the budget denial move," Kassahon said, "but one more move remains – to revoke the school operating license so that that they must close down."

"I have no problem with the students learning in the public secular school system, but on one condition – that the public religious schools are closed down," he said.

Michal, a Kfar Saba resident came to Petah Tikva in order to support the community. "This struggle is connected to all of Israeli society, to all the sectors," she said to Ynet. "Today it's them, tomorrow it's us."

"If I was brought into this world only to help the Ethiopians that is enough for me."
Failed messiah was established and run in 2004 by Mr. Shmarya (Scott)Rosenberg. The site was acquired by Diversified Holdings, Feb 2016.