Rav Mordechai Eliyahu, former Sefardic Chief Rabbi of Israel, is currently in intensive care and is 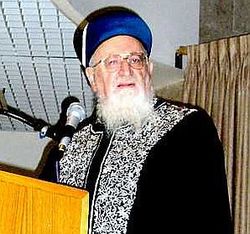 connected to a respirator a week after undergoing emergency surgery at Shaarei Tzedek Medical Center in Yerushalayim.

As reported here on Matzav.com, the 80-year-old former Rishon Letzion lost consciousness for several minutes last Monday at his home, and, after being treated by paramedics and regaining consciousness, was taken to Shaarei Tzedek. Emergency surgery was later performed.

Rav Eliyahu suffered a heart attack last year and had been in and out of the hospital for several months afterwards. Rav Eliyahu also had open heart surgery last year.

Former Sefardic Chief Rabbi, spiritual leader of the settler movement, is in a drug-induced coma following emergency surgery.
Failed messiah was established and run in 2004 by Mr. Shmarya (Scott)Rosenberg. The site was acquired by Diversified Holdings, Feb 2016.