Letter from Jerusalem: Women Want To Sit At The Back Of The Bus

What do women want?
Segregated buses preferred by many women, reinforce respect for them
Shimon Stern • Ynet

Segregated bus lines have been in existence in Israel for 15 years, and in many countries such as the United States, Japan, Greece, and France one can find separate train cars for women. There, everyone understands the legitimacy of the issue – women who wish to sit separately because of the terribly crowded conditions and for other reasons. 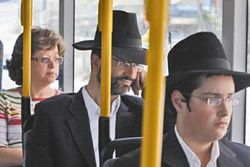 Only recently, after 15 years, some Reformers and other radicals are suddenly coming up with ridiculous claims in order to tease and destroy something that only has to do with the ultra-Orthodox community. We are dealing with a handful of people who are obsessed with the haredim and have failed in organizing three demonstrations that never drew more than 20 people – compared to thousands who rallied in favor of the segregated buses in Jerusalem.

In addition, about 6,000 letters have been sent to the Transportation Ministry in favor of the arrangement, compared to only a few dozens opposing it – so tell me, what do we need to change?

Each person has the right to decide, for themselves, what constitutes humiliation or respect. I therefore think that it is clear that a community espousing gender-segregated systems at schools, synagogues, and celebrations is also allowed to decide that sitting separately is not humiliating – rather, a woman’s modesty is part of the respect she garners and plays an integral part in her dignified personality.

Did you ask the women?
Every haredi, man or woman, follows Jewish Law – which according to all rabbis rules that segregation is mandatory. In addition, we saw the establishment of a haredi women’s lobby in favor of segregated lines – this lobby comprises women of all kinds and they view this segregation as a right and honor to travel that way.

By the way, we also received responses from many secular women who said they prefer it that way, because of the abuse they suffer on regular bus lines. 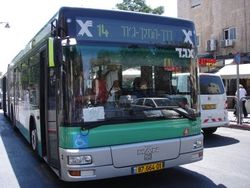 Some people argue that “there’s violence on the segregated buses.” But there’s also violence on regular bus lines – I saw people fighting for window seats with my own eyes. So are we going to shut down those lines too? Meanwhile, the State also funds stadiums, which sometimes feature plenty of violence. Does anyone think of shutting down these venues?

And one more thing: If segregated buses are regulated by law, such violent acts will disappear. The moment the rules are clear, there is no room for arguments and problems. Beyond that, the violence on such buses is mostly verbal and comes from a handful of hotheads who are misbehaving (in contradiction to the view of all rabbis). But why generalize and exaggerat, while punishing the haredim collectively? This is unacceptable to anyone.

And last but not least, they tell us: “Why don’t you just establish a private company for segregated buses?” And I say: I wish they permitted us to do so. After all, these lines are highly profitable. About six months ago we offered free public transportation, yet the Transportation Ministry fought against it, claiming it was illegal. So please, if we have to travel using the national bus company, at least make it suitable for our conscience.

Letter from Jerusalem: Women Want To Sit At The Back Of The Bus

Haredi advocate for gender separation cries anti-haredi bias, says women like to sit in back.
Failed messiah was established and run in 2004 by Mr. Shmarya (Scott)Rosenberg. The site was acquired by Diversified Holdings, Feb 2016.