« Madonna In Her Own Words:I Found An Answer In Kabbalah | Main | Are The Feds Working On More Money Laundering Indictments? »

Israel to Expel Foreign Workers, Refugees to be “Like Every Other Nation,” Shas Head Says

Israel to expel foreigners in order to “Be like Every other Nation”
Elana Maryles Sztokman • Ynet / ElanaSztokman.com

The announcement this morning by Interior Minister Eli Yishai of Shas that the foreign workers will undergo a “massive expulsion” is surprising not because of Yishai’s undaunted ability to withstand public pressure. We’ve seen that before. What shocked me was his rationale: “Whoever is found will not receive refuge — just like every ‘civilized’ country in the world,” he said. Actually, the word he used, “metukenet” is difficult to translate. Based on the root “teken”, which means either “correct” or “standard”, it seems to mean that in a medina metukenet all norms are in order, that rules and regulations are in place to ensure a perceived decorum. Well, chasing out refugees may make us like other nations, but it will hardly make us civilized. 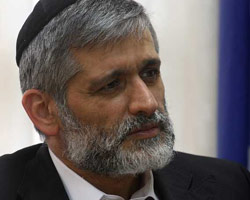 The irony here cannot be understated. Yishai, in his various governmental positions, has been one of the greatest proponents of the idea that Israel must be a nation unlike all others. Not only does The Jewish Way dominate his implementation of all matters of marriage, divorce and conversion, but this Jewish Way that he promotes is a very specific, Strictly Orthodox Way. The presumed reasoning, one that we’ve heard so often that it weighs on our ears, our heads and our hearts blocking out all compassion and human breath, is that the Jewish Nation must be preserved in its purity, what can only be done through absolute ultra-Orthodox control over the issues of who is in and who is out. The Jewish Nation must be perfectly Jewish.

Now, however, Yishai conveniently wants us to be like all other nations. Just as other nations freely close their eyes to human suffering, so, too, the Jewish nation needs to be able to do the same. Just as the United States was able to send away the St Louis when the boat full of European Jewish escapees sought shelter from Nazi Germany, returning every passenger to the gas chambers without even the slightest flinch of what we might call “conscience,” so, too, Yishai reasons, the Jewish nation can turn a blind eye to the plight of refugees, and thus be considered “civilized”.

The debate over whether Israel should be a country like all others or a distinct light unto the nations goes back over a century, when European Jews were barely beginning to dream of this reality. Herzl, a man with minimal affinity towards Jewish heritage and culture, envisioned a country like all others, speaking German and appreciating European music and theater. Ahad Ha’am, on the other hand, believed that Israel must be a Jewishly spiritual-religious center, a place from which Jewish culture and ethics emanate and inspire Jews and non-Jews around the world.

This debate continues in full force today, and is at the core of the burning issues that Yishai’s Interior Ministry currently faces. Civil marriage and divorce, the place of non-Jews in Israel, and how Israel relates to refugees of the world are all manifestations of this same question. What kind of nation are we? How do we relate to non-Jews in our midst? What aspects of our “civilized culture” are based on a vision of our distinction, and what aspects are based on our desire to be “normal”, like everyone else? So far, the ultra-Orthodox domination of marriage and divorce has ensured that when it comes to these central issues, the vision of Jewish-Orthodox remains fixed. Jewish Nation effectively means that needs of non-Jews, and non-Orthodox Jews, are tangential at best.

So here we are, witnessing this tragic irony in which the first time an ultra-Orthodox leader declares an opposing vision to be like all others, it is for the sake of being able to use an iron fist to expel the weakest members of our society.

Yishai has it backwards. This is a deplorable reversal of when we should be thinking for ourselves and when we should take inspiration from others. If the rest of the world kicks out refugees, we should not emulate others but explore our own morality. By contrast, if, in the rest of the world, abused women are allowed to freely exit marriage, we should not be so insistent that this is “our way” and therefore women are stuck. The unwillingness to see the global perspective and the universal moral implications of the agunah issue are rooted in an archaic, stubborn insistence that this is the Jewish way. It’s heartbreaking.

But there is another tragic distortion at work here. What should make the Jewish nation distinct is not the strict, unbending adherence to the greatest minutiae of ancient, archaic Jewish regulations. What should make us distinct is our commitment to the Jewish ethic. Torah is meant to offer us a set of moral precepts that would take us through history as a compassionate, ethical people. I’ve said this many times before, but I’ll say it again. The most fundamental ethic of Torah is compassion. Shabbat, as mandated in the Torah, is about creating social equality — everyone is equally entitled to rest, from landlords to workers to animals, social hierarchies are temporarily set aside, and all forms of ownership and control over technology and the environment cease and desist. It’s all about kindness and compassion towards one’s surroundings. Similarly, the biblical dictate that has been interpreted as “separation of meat and milk” is actually based on a much more straightforward precept: do not cook a kid in its mother’s milk. That is, animals have relationships and feelings, and we need to think about animals not merely in terms of our own lustful needs but in terms of living creatures. It’s about learning to feel compassion for the mother. These concepts are so fundamental that the Torah tells us 36 times to be compassionate to the stranger for we were strangers in Egypt. And this is why, when the proselyte came to Hillel to ask to be taught the entire Torah while standing on one foot, Hillel replied, “Do not do unto others as you would not want to be done unto you. The rest is commentary.”

Yet, our government, led by the nose by ultra-Orthodox ministers who have completely lost the plot, is about to let go of the core issue that make us distinct: compassion. We are about to become no different from the rest of the world that sent Jews to the gas chambers, all for sake of control, power, and being “metukanim“. If we send away foreign workers, people whose lives are so desperate that they are willing to live in rat-infested hellholes at the Tel Aviv central cus station, refugees, if we continue to ignore their lives and their humanity, it will be clear that we are in fact no longer a Jewish state.

Israel to Expel Foreign Workers, Refugees to be “Like Every Other Nation,” Shas Head Says