« Under Threat Of Financial Ruin, Religious Schools Agree To Accept Ethiopian And Disabled Students | Main | Kennedy Placed Earth From His Brothers' Graves On The Grave Of Assassinated PM Yitzhak Rabin »

Yeshiva bordering Kiryas Joel cited for building and code violations. Property owner referred questions to his attorney whom he refused to identify.

MONROE — The big house set back in the woods at the end of Cliff Court has been a source of mystery and irritation for neighbors on the quiet cul de sac in recent months.

Vehicles come and go at all hours, and several times, whole groups of them have sped up the driveway with emergency lights flashing. 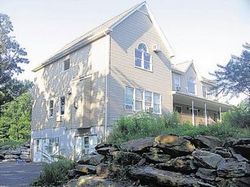 Once, the Hasidic boys who study at a makeshift school inside the house spilled out into the neighborhood in pursuit of a bear.

And perhaps the oddest: Neighbors have watched drivers pass black, plastic garbage bags from one vehicle to another at night at the end of the driveway.

What's going on at 21 Cliff Court?

At the moment, it's clear that a school is operating there, although neither the owner of the house nor the men running the school will discuss it.

The Town of Monroe building inspector concluded as much on Aug. 3, when he counted four boys outside and spied 11 black hats inside by peering through a garage window.

He wound up citing the owner for converting the three-car garage and basement into classrooms without building permits, along with six other code violations.

That hasn't stopped classes. On Wednesday morning, despite the violations and a foreclosure cloud over the property, teenage boys could be seen studying inside the garage. One was sent outside to report that no adults wanted to answer questions.

Isidor Landau, the Spring Valley man who bought the newly built house for $800,000 in 2004, later referred questions to his attorney, whom he wouldn't identify.

The property remains in the hands of a limited-liability corporation Landau transferred it to, although the mortgage company that lent him and his wife $640,000 for the house foreclosed on it in June, claiming that payments stopped last year.

It's unclear what town approvals, aside from building permits, were needed to create a school in the house, which the town classifies as a single-family home with an accessory apartment and taxes accordingly. Property-tax bills totaled nearly $29,000 last year.

Neighbors say the house — one of eight on the block — initially was used to board some of the Eastern European women who clean homes in neighboring Kiryas Joel.

Yeshiva bordering Kiryas Joel cited for building and code violations. Property owner referred questions to his attorney whom he refused to identify.
Failed messiah was established and run in 2004 by Mr. Shmarya (Scott)Rosenberg. The site was acquired by Diversified Holdings, Feb 2016.