Haredi protesters vandalized a security vehicle parked near a welfare bureau. Protest aimed at Social Services' involvement in the case of the mother suspected of starving her three-year-old son.

Just one day after the violent riots in Jerusalem, ultra-Orthodox elements continued disrupting order in the capital on Sunday. Haredi protestors who gathered at the  Mea Shearim neighborhood 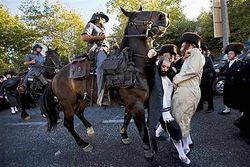 vandalized a security vehicle parked near a welfare bureau. This time the protest was aimed at Social Services' involvement in the case of the mother suspected of starving her three-year-old son.

The protestors, who claim Social Services cooperated with the police in the case, broke the vehicle's mirrors and punctured its tiers. A police force dispatched to the scene helped the security company's representative to evacuate the car from the street.

Shortly after the 'starving mother' affair was uncovered, social workers in Jerusalem claimed that they had become targets for members of the haredi community.

Last week, following the arrest of a man who posted fliers condemning the Ministry of Social Affairs, ultra-Orthodox protestors attempted to block one of the capital's streets 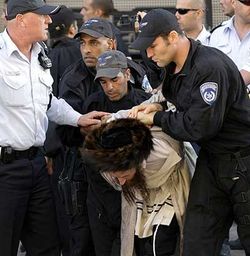 using stones and metal rods. The demonstrators hurled stones at police forces which eventually managed to remove the metal rods.

Sunday's incidents follow two particularly violent days in the capital, during which a young haredi man was run over and dragged by a moving vehicle; six police officers were lightly injured and some 16 protestors arrested.

On Saturday, hundreds of ultra-Orthodox demonstrated and attempted to block the entrance to the Karta parking lot in the city. The protestors blocked adjacent streets and confronted police forces which tried to prevent them from reaching the parking lot. Eleven of the detainees were released on Sunday with court restrictions, but following an appeal filed by local police, the court ordered that the detainees' remand be extended by 24 hours.

Three months have passed since Jerusalem's Mayor Nir Barkat declared the opening of the parking lot on Shabbat and seven weeks elapsed since the 'starving mother' affair was exposed. The two cases led to violent clashes in the capital and it appears the conflict is turning out to be one of the most severe crises between seculars and ultra-Orthodox in the city.

Sources from the Jerusalem Police addressed the incidents on Saturday, one of whom told Ynet, "This is a step-up, both of in terms of the violence and of the amount of people involved, as well as the attempts to block streets and the entrance to the Karta parking lot." Nevertheless, people close to the mayor stressed he has no intention of going back on his decision.

Haredi protesters vandalized a security vehicle parked near a welfare bureau. Protest aimed at Social Services' involvement in the case of the mother suspected of starving her three-year-old son.
Failed messiah was established and run in 2004 by Mr. Shmarya (Scott)Rosenberg. The site was acquired by Diversified Holdings, Feb 2016.