« Annals of Censorship: How Haredim View History And Truth | Main | Weekdays, The Rabbis Dined Out »

Hundreds of ultra-orthodox gathered in Jerusalem Saturday afternoon to protest the opening of the Karta parking lot on Shabbat. 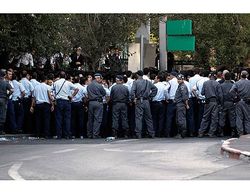 The protestors attempted to march towards the parking lot, but the police prevented them from doing so. However, shortly afterwards many managed to reach the site and tried to block traffic at an adjacent road. The demonstrators were dispersed by police forces, who also arrested six protestors.

At the same time, dozens of haredi youths rallied in the Bar-Ilan road.

The demonstrators hurled stones at cars driving by, causing one car passenger to be mildly injured. In addition, damage was caused to several vehicles.

Last week a group of some 200 haredim attempted to storm into the parking lot compound but was blocked by police officers. Other protestors blocked a nearby road.

Jerusalem Mayor Nir Barkat has lately sparked outrage among the city's ultra-Orthodox community by his decision to open the parking lot on Saturdays in a bid to alleviate the shortage of parking spots near the Old City.

In recent weeks haredim have been protesting in the area every Saturday.

Clashes meant to protest Shabbat "desecration."
Failed messiah was established and run in 2004 by Mr. Shmarya (Scott)Rosenberg. The site was acquired by Diversified Holdings, Feb 2016.